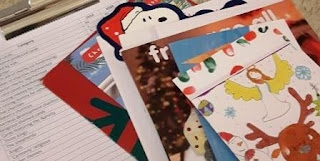 It's hard to believe I've done this for 10 Christmasses in a row, but here we are - the 10th ACCA. Links to all the previous audits are on this page where you can mourn for lost categories like "Dogs in Santa Hats", "Llamas", "Christmas Elves" and so on. There are some new categories this year. For the first time I have counted puns and also greetings in Welsh. There is a surprise return for the "Hares and Moon" combo and in the religious themed cards a continued absence for the Shepherds who visited the Holy Family on Christmas night.

I will be posting some cards of note in a future post. However, to liven up this post I am going to include cards illustrated by children. These are all schools fundraising cards, and I really like them. Hopefully the children will find it encouraging that their cards feature on my blog. (If their parents show them!)

Total number of cards: 91 (an increase on last year!)

Cards with glitter: 12 (back up to a similar number to a couple of years ago. The 'glitter is evil' warnings seems to have worn off.)

Cards sold in aid of charity (or fundraising): 53

Most popular charity represented: Cancer Research Campaign with 7 cards. This ends the dominance of British Heart Foundation who were the most popular charity for 3 years in a row. BHF were joint second in the list with 5 cards, alongside MIND, the Marie Keating Foundation, and the Traidcraft/Christian Aid/CAFOD/SCIAF combination

Charity card cause breakdown (this is approximate because some cards covered more than one type of cause, and not every charity explains what it does)

Religious-themed cards: 19 - Despite the overall number of cards being up, this was a drop of one card from the 2020 ACCA. Again it meant less than a quarter of the cards we received had a religious design.

The shepherds: 0 (for the second year running!)

Bears: 0 (this used to be a very popular category - completely disappeared this year!)

Reindeer: 6 (there was a big debate whether to include a moose called Chris in this category, but categories are specific for a reason and moose are not reindeer!)

Sheep: 2 (both of which had puns on the front. Good showing for the sheep!)

Dogs with or without Santa hats: 0 (this fluctuates year on year and this year was a nil year)

Other animals with or without Santa hats: 6 (A range of animals were represented including a dinosaur. Do dinosaurs count? Are they animals? Yes, they count!)

Snowpeople: 8 (a massive jump in this category this year)

Licensed characters: 6 (4 featuring Snoopy and Peanuts characters, and another 2 featuring the Snowman by Raymond Briggs - which also got counted in the Snowpeople category. Here's a note on inconsistencies though. I didn't count the Snoopy cards in the dogs category, which I've only just realised while writing this up...)

There were no cards referencing the pandemic this year. Everyone is heartily fed up with it.

Word 'Christmas' on the front: 25 (of which only 2 were religious)

Lines or titles of Christmas songs: 3

Puns: 8 (Cathy suggested we count these this year!)

There are perennial themes, and there are some that wax and wane considerably year on year. It feels like the number of religious themed cards are slowly declining. They tend to the more serious-looking cards that we receive and maybe people want to send a bit of fun in the post at Christmastime.

I was really surprised to get no cards featuring bears this year. In the first audit almost ten per cent of the cards featured bears, and although in subsequent years, there have only been a handful, there has always been at least one. Until this year. It would appear the seasonal ursine population has gone extinct.

Now that I have ten years worth of data I am wondering about producing a meta-analysis, but that will probably require me creating a spreadsheet, so I will have to see if I have time to do that.

Thank you to everyone who sent us Christmas cards this year and who have helped keep this audit going!