The boat of belief and the rocks of reality

I remember my dad telling me that it didn’t really matter if a person was sincere about something, because you could be sincerely wrong. That’s just one of those things that has stuck with me, for more than 30 years.

I think about it every time someone talks about their “beliefs” and how they feel their beliefs should be respected, by which they usually mean not challenged. I also think about it when seeing the sort of things covid-denialists post on social media that subsequently appear on Reddit’s Herman Cain Awards. Confident statements that they are protected by the blood of Jesus, and that they choose to live in faith not in fear. Or propagating misinformation that covid is fake news and part of some planned assault on individual liberties.

The thing is, Sars-Cov2, which causes covid, doesn’t care about a person’s beliefs. What it sees are some nice, warm, unprotected airways that it can take up residence in, and multiply. It’s a virus – and a fascinating virus at that – and it doesn’t go away because people don’t believe in it or because people have rebuked it and invoked a deity’s protection.

One of the cleverest jokes in any Pixar movie is in Inside Out, a movie where the central characters are emotions felt by a girl called Riley. 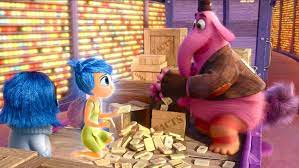 When the characters Joy and Sadness are accidentally cut off from the rest of the emotions, they try to make their way back through Riley’s mind to the central control room. They board the ‘train of thought’ accompanied by a character they meet in Riley’s subconscious – Riley’s semi-forgotten imaginary friend Bing-Bong. On the train Joy knocks over crates containing facts and opinions and remarks that they look very similar. Bing-Bong tells her not to bother sorting them out because no-one can tell them apart. (Here's the scene on YouTube)

That’s incredibly astute. It explains covid-denialists, conspiracists, woo-peddlers and religious fundamentalists. They literally cannot tell an objective, demonstrable fact from an unevidenced opinion. Everything has the same weight – a meme off Facebook, through to a talking head on a chat show, through to a peer-reviewed paper published in a reputable journal. And when we factor in confirmation bias, where we are more likely to listen to sources that corroborate our existing beliefs rather than sources that conflict with our beliefs, we can end up adrift in opinions, thinking they are truths.

But the rocks of reality poke through the surface of the sea.

We see this in the multiple posts on the Herman Cain Awards Reddit, where so many people follow the same track. They post covid-denying memes, antivax propaganda, weird claims about conspiracy, then they get ill. Some continue denying the seriousness of their illness right up until they are posting from their ICU bed in hospital, often struggling to spell words correctly because of hypoxia as their oxygen levels plummet and their brains struggle to function. Then their relatives and friends start posting tributes to them.

Their belief boat has been holed by the rocks of reality. And they drown.

What is unusual about the pandemic, is that this is happening on a much larger scale than usual. Most religious people have experienced unanswered prayers, and have girded themselves with all kinds of reasons why people die instead of being healed, but this usually happens occasionally and can be dealt with as one-offs. It isn’t being chronicled the way these covid-deaths are being shown to be oblivious to the effects of prayer.

I come back to what my dad told me. Sincerity is no protection. Being sincerely wrong about covid can mean trusting in an opinion that isn’t going to protect you from reality.