This monthly report is slightly later than usual because I was on holiday on the cusp of June and July, and there has been some football on!

In terms of another sport, I've already blogged about buying a copy of Blood Bowl: Second Season Edition. I actually bought that at the very end of April, but a couple of weeks later I responded to the siren lure of Firestorm Games, went in and bought another new team. It's the Necormantic Horror team complete with werewolves, zombies, wights and golems. Now I just need to find the time to glue and paint them.

Early on in the month, Cathy spotted some Lego on sale on Facebook. In the crate we found a selection of charming Fabuland figures, that the company produced in the early 80s.

I have told the story a few times about the first time I visited Cathy's house and she showed me her collection of Fabuland sets still in their original boxes. That was one of the ways I knew she was the one! It's nice to add some new figures and I particularly liked the walrus boat captain!
I've already blogged about the Grangetown Zoo, which was slightly different this year and very enjoyable again. The following weekend I went back to where Anna Palamar created her mural on the side of Bruton's Bakery on Clare Road and took a photo of the finished artwork. 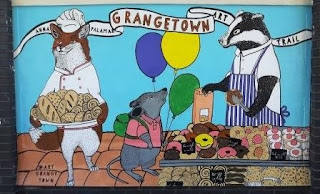 We are still living in the middle of a pandemic. I was invited back to the Bayside Vaccination Centre in the old Toys 'R' Us building and had my second dose. No side effects this time!

But even though there is a pandemic, and new variants of covid hitting the headlines, we made it to our first trip to the cinema since March 2020. It was a free preview of In The Heights at the Odeon. It's always a bit weird going there because it's the cinema I used to work in, back when it was operated by UCI. My job there actually began in June 2001, so that was 20 years ago this month!.

There are plans to knock down that cinema along with the rest of the Atlantic Wharf Leisure Village (as it was originally known) to build a new concert arena. So I did wonder if In The Heights will be the last film I see there before the bulldozers move in. (Read my film review here.)

And then of course, along came the European Championships. I have been collecting the football stickers again this year, after giving the World Cup ones in 2018 a miss.

My catchphrase after each game I've watched has been "To the wallchart!" 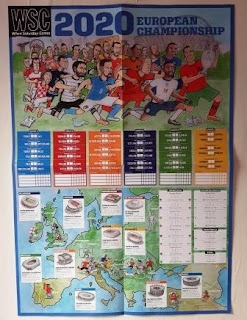 This is the first international tournament since my Dad died unexpectedly in March 2019, and it has stirred up some feelings of grief and loss again. My Dad loved World Cups and European Championships and I know he would have been ringing me after every Wales, England or Scotland game to dissect the game and discuss the results. I have really missed that.
But the wallchart has been a helpful distraction from that post-game void which Dad would have filled.  I have often put wallcharts up and then forgotten about them. So this year I was quite pleased with myself that I managed to get out of the group stages and fill in all the gaps in the round of 16. 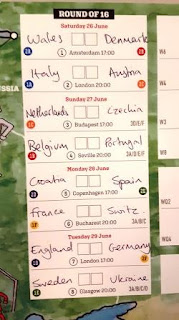 And that took us up virtually to the end of the month, when we went on holiday! I will be posting about some of our holiday experiences in the next few days!