In the Heights marks our return to cinema-going

Cathy scored us some preview tickets for a film called In The Heights last week, which marked our first trip to the cinema since the beginning of March 2020. That 15 months gap has probably been the longest stretch between going to a movie theatre in absolutely ages.

We got into the cinema and Cathy suddenly asked me if I knew how long the film lasted for. I looked it up, and said "Well, it says here it's two hours and twenty three minutes long... and it's a musical!" We looked at each other in mild, apprehensive horror. Neither of us particularly like musicals. Oh, well, it was a free preview, and how bad could it be?

It turned out it wasn't bad at all. It was excellent. Mild spoilers follow. 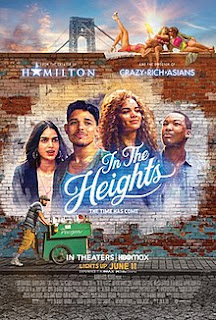 The film is set in Washington Heights in New York City, a predominantly Hispanic immigrant neighbourhood. It's written by Lin Manuel Miranda, who wrote Hamilton, which everyone raves about but I have yet to watch.

The story really pulls at some big themes, especially the tension between loving your community and simultaneously wanting to escape it to something better, with associated feelings of disloyalty and guilt for daring to dream of somewhere better.

The character have a mix of dreams. Characters dream of setting up their own businesses, returning to Peurto Rico to open a bar on a beach, or even just gaining American citizenship because they are 'undocumented'. A father is willing to sell his business, built up over years, to pay for his daughter's tuition at university. His dream is that she will eclipse him, and there is a powerful moment when he tells her that she is better than him because of her hope for the future.

Mixed in with this, are themes around gentrification and the changes being made to poor neighbourhoods in the name of progress. That really resonated with me as my neighbourhood changes and big plans are put through by the council that will displace people and nibble away at parkland. But the story makes the point that areas always change as people flow through them and this is part of the life-cycle of any community.

I was surprised how much I enjoyed the music. There are some fantastic song and dance sequences and the mainly young cast all carry it off with depth and feeling. A few recognised Hispanic actors appear, including Jimmy Smits. The only one that jarred was seeing Stephanie Beatriz as a nail stylist with big hair, because I'm used to seeing her as the scary Roza in Brooklyn NineNine. After the initial shock though, she was very good and it's nice to see actors playing completely different roles.

Overall then, I not only survived a two hour and twenty three minute musical, but I would happily watch it again. Because of covid restrictions the auditorium was only about a quarter full. We had to leave gaps between rows which meant nobody kicking the back of our seats, and nobody with big hair sitting directly ahead of us. I could get used to that kind of cinema experience!