Last weekend it was the second community creative event called the Grangetown Zoo organised by the Grangetown Art Trail. The 2020 lockdown version was a lot of fun, and so we decided to take part again. Cathy made these amazing rhinos to sit in our window, and added an explanatory panel about rhinos as well. There were a lot of art activities happening in Grange Gardens and particularly in the new Pavilion. Unfortunately, we weren't able to catch those. However, we saw some very colourful snails in the Pavilion windows. 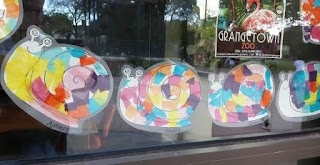 We also didn't make it to the craft activities in St. Paul's Church Hall, but we did take a picture of their giraffe, peeking over the churchyard railings. 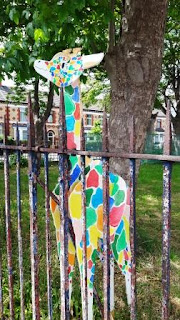 Walking around Grangetown, some of the schools had really embraced the Grangetown Zoo concept. These murals at St Paul's Primary School were great. Giraffes were clearly a bit of a theme for places named after St Paul. 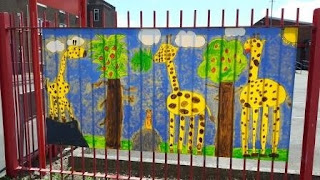 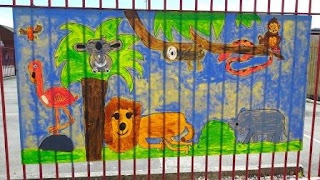 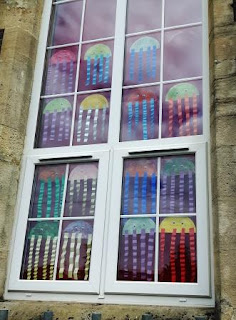 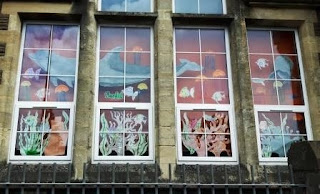 The school really went for broke on their giraffe though. I had to cross the road to take a photo! (Cathy for scale!) 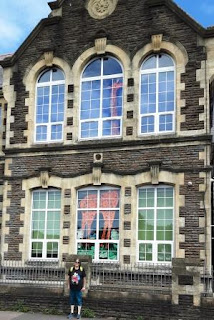 A number of local businesses unleashed their creative side. (It hepled that they were open this year!) The lovely Honeycomb toy shop was transformed into a dragon's cave. I especially liked the purple dragon. 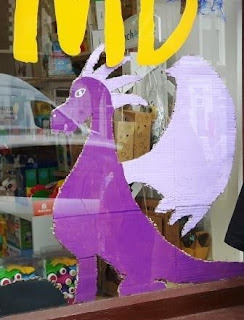 (We braved the dragons and went inside. We may have bought some things. Cough, cough.)
Opposite Honeycomb was this classy tiger in the window of Lufkin Coffee. 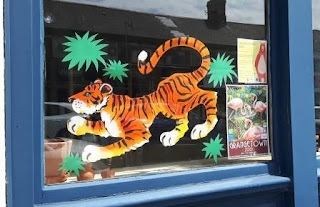 And local artist Anna Palamar had been asked to create a mural on the side of Bruton's Bakery on Clare Road. We have been big fans of Anna's for ages and it was serendipitous to find her adding a few finishing touches to the mural. She was persuaded to pose for a photo with me. 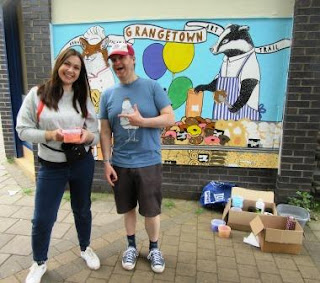 The attention to detail in the mural is superb. Good service etiquette too, with the badger using tongs to pick up pastries for their customer. 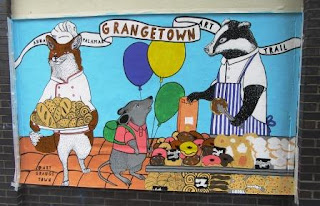 Meanwhile down near The Marl, the Channel View Leisure Centre was entertaining a giant whale and assorted fishy friends. 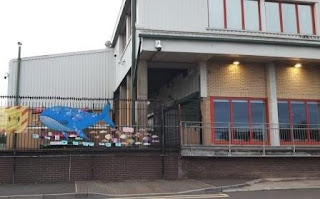 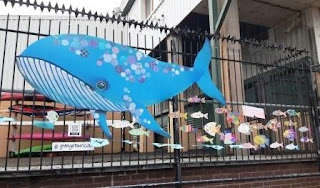 The real fun, like last year, was wandering around and finding animals in unexpected places, like behind gates on one of the lanes. 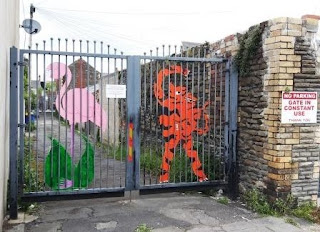 And the bit I enjoyed most was just seeing people's windows full of animals. Although, I struggled to take pictures of the aviary in Earl Street because the windows were too clean and reflected everything! Here's a parrot though. 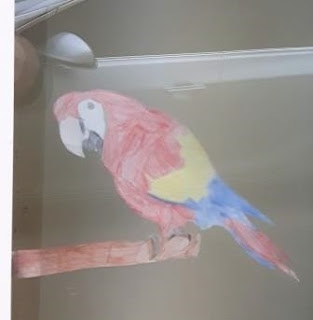 And here's some more windows. From an aviary to an apiary saying Save Bees, another parrot and some penguins! 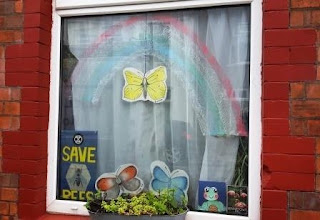 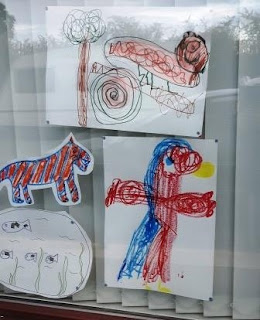 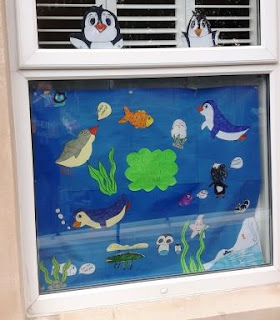 Even though we weren't able to take part in any of the activities due to other commitments, it was really enjoyable taking part by going out and finding animals. The creativity of our community really brightened up our weekend and for me, that's what the Grangetown Zoo should be all about!
Posted by Jongudmund at 21:21