For the week that crossed over from June into July, I was on holiday on the Lleyn Peninsular with Cathy and my Mum. When we got there on the Sunday, we discussed what we were gong to do in the week. We already had a couple of things booked, and then Portmeirion was suggested. We had never been, and Mum had been some time ago with my Grandma, and said she would like to go again, so we went online booked our tickets and set off the next morning.

All that I really knew about Portmeirion was that is was where the sixties TV show The Prisoner was filmed, that it was supposed to be an Italian village in Wales, and that you had to pay to get in. That latter point was something my Dad objected to, which is probably why we never went as a family when I was younger. It's a shame because I think he would have really liked the quirkiness of the place. (Also, I knew the Portmeirion brand of tableware.)

It wasn't really what I expected but in many ways it was so much more.

Portmeirion is really a little cliff-enclosed valley on the seashore. The buildings have been arranged mainly around the edge of the valley, with a large central square. 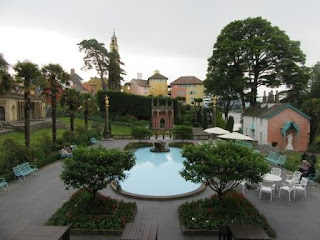 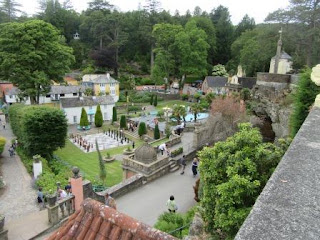 There is also a smaller 'town square' that you reach up some steps. 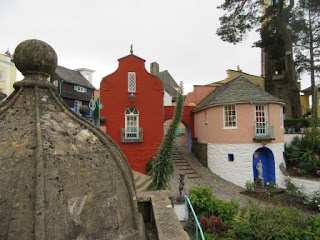 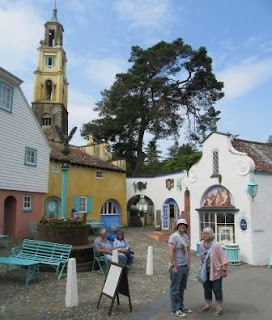 As I was reading the guidebook, I started to get really drawn in to the surreal world of Clough Williams-Ellis, the architect who created Portmeirion. He was a believer in architecture as a form of art. Why else would you paint fake windows on a row of houses except to make them look better?
The onion dome minaret was added to hide a chimney that he thought looked ugly.
He also built a chantry, where nobody ever chanted. He just liked the word. 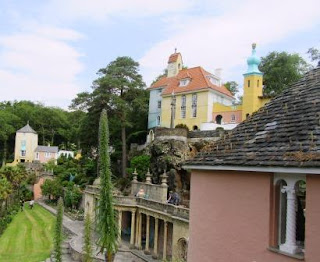 And he also decided his village didn't have enough domes. So he built one! 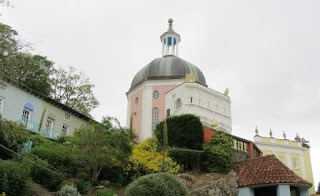 There are a lot of clever aspects to the building work. For example, this tower uses perspective to trick you into thinking it's taller than it actually is. The upper levels are smaller in turn so the building looks taller. 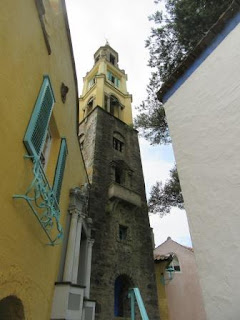 He also very cleverly used natural rock outcrops to add height to a lot of buildings too. 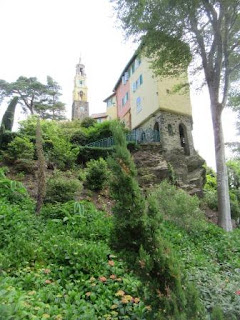 The buildings are covered in fun little foibles. Plaques, murals and statues in niches: animals and fish and nymphs, and just about anything. I really liked this dragon. 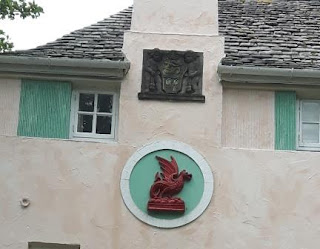 This lion has a slightly startled expression. 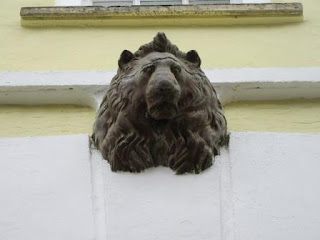 But this one was just having a good time! 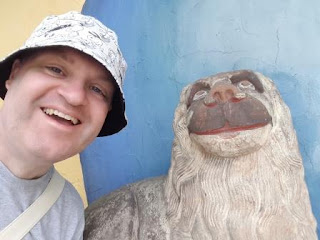 There was also a great story about this copper statue of Hercules. 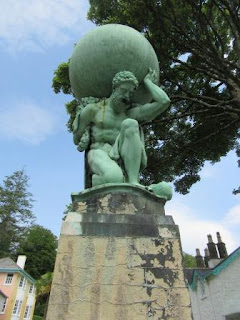 Apparently, Clough Williams-Ellis bought the statue in Aberdeen, and drove with it on the back of a pick-up truck all the way from Aberdeen to Portmeirion. In the days before motorways, that would hve been an epic trek. I've been to Aberdeen. It's a long way from North Wales.
Another thing we didn't expect were the woodland walks. Cathy was very excited to find a giant redwood tree. 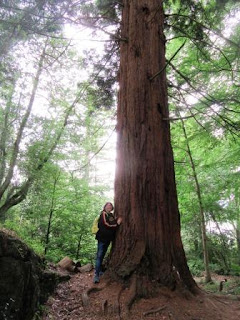 There were some other beautiful mature trees as well. 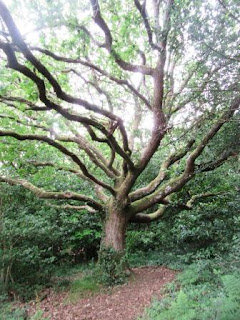 We walked around in a loop that brought us to the novelty "lighthouse". Again, it was pretty, if not very functional. 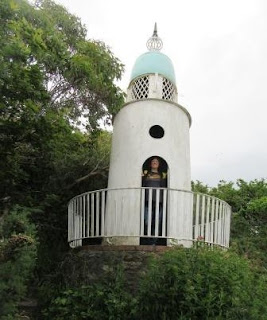 Although the view over the estuary was magnificent. 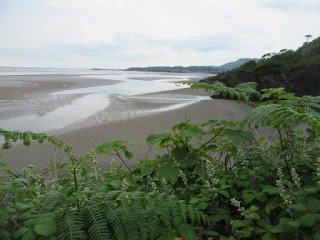 So, what was my overall impression. it was a bit bonkers, but it was also brilliant. My friend Heather has described it as like walking through a film set. The thing that came to mind when I was there is that it felt like a life-size model village, and we were the toys that had come to life.
It was a great way to start our week away, and it's one of those places I feel it would be worth visiting again, particularly at a different time of the year.
Posted by Jongudmund at 22:18