Back to football after 16 months away

On Saturday I went to my first football match since March 2020. The pandemic nixed a lot of my plans for going to football matches, and last season was the first season since before 1992-93 (when my personal records begin) where I attended zero games. (I blogged about that a couple of months ago.)

But, at last, attending football is an option again. Barry Town had arranged a friendly with Bristol Manor Farm who play in the Southern League. My friend Tom acted as my guide and we drove across the bridge to Bristol to watch the game.

I don't think I have ever been this excited about a pre-season friendly. 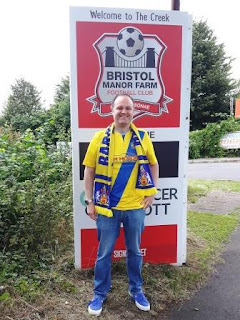 The Creek, where Bristol Manor Farm play, is an adorable little non-league ground that has all the magical charm that typifies lower level football in the UK. We had a very warm welcome from the local supporters, many of whom were impressed with the noise generated from the bit of the ground colonised by the Barry fans. 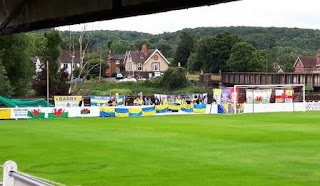 Sadly, we didn't see their number one fan, who dresses as a scarecrow and shouts "Farmy Army". He was apparently staying away for health reasons.
Nonetheless, I really enjoyed seeing people who I hadn't seen for well over a year and finding out how they were doing.
The clouds looked a bit forbidding for most of the game, but we didn't have any rain. 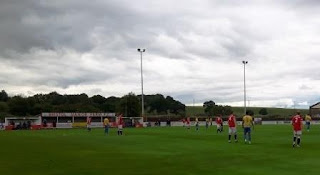 There is a railway embankment behind those dug outs in the picture, and we saw a couple of trains zip along. Sadly I wasn't quick enough to get a picture.
I did however take a picture of this mark on the pitch, which could be a faerie ring. I was waiting to see if the fey folk would carry off any of the players who stood in it, but none of them did. 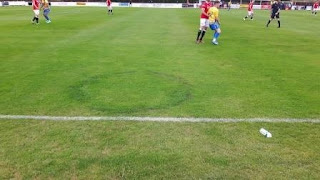 You do get close to the action at grounds like these. 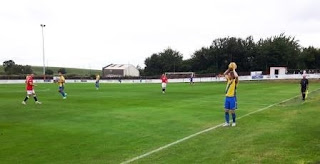 The pitch also had a definite slope aspect to it, but not just in one direction. At the lower end the pitch seemed to slope in different directions towards the corners. Barry were unable to make any use of kicking downhill in the first half and it was 0-0 at half time.
However, even though they were kicking up the slope in the second half, Barry scored a late goal to win the game 1-0. At the end, the team went over to the "Barry end" to thank the fans for their support. 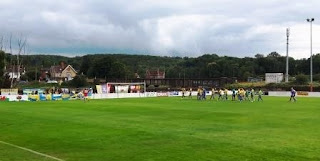 So, I was a very happy football fan as we drove home back over the bridge. It was a brilliant way to start a new season of matchgoing, and I hope this season I will be able to see a lot of games!
Posted by Jongudmund at 10:18