July started with us coming back from a week's holiday on the Lleyn Peninsular in North Wales (see blog posts here), and ended with us on holiday in Shropshire with family from Salop and from Edinburgh.

Inbetween these times away, we squeezed in quite a bit.

I came back from our North Wales holiday with a sore throat and sneezing more than usual. Apparently that can be a sign of coronavirus infection in people who have been double-jabbed, so Cathy and I booked appointments at the drive-through test centre at the Cardiff City Stadium. I now feel I have lived the full pandemic experience, now that I have had to stick a swab up my nose!

Our tests were negative. I was impressed with the organisation of the test centre. Everyone there really knew the drill. They knew we were coming, and processed us through very politely and quickly. We had the results texted to us in less than 24 hours. It was a good experience in a stressful moment.

We also watched the European Championships semi-finals and final. England blew it, is my verdict, with a terrible penalty shoot-out in the final that will potentially have scarred another generation of kids. I mentioned last month how this was the first international championship I have experienced since my Dad died, and after the final I have thought several times about how he would have rung me up to dissect the failure in detail. These are the unexpected moments when grief catches us.

In my other blogging project, I reached a new milstone - 700 baseball cards featuring Tony Gwynn. I feel I am starting to run out of steam a bit with the baseball cards and my blogging has been very gappy of late as the supply of new cards has run out.

It might continue to be gappy, as I have started going to football matches again. I've blogged about my trips to Bristol and Aberdare. I added a third match in the month of July as The New Saints were playing Kauna Zalgiris from Lithuania in a Europa Conference League Qualifying game during our week in Shropshire. As TNS play in Oswestry, just half an hour away, I went with my brother for a fun evening out.

TNS already had a 5-0 lead from the first leg in Lithuania, so I was hopeful we would see some goals. And we did.

It was a very one-sided affair. Kauno Zalgiris played suicide football, trying to build from the back and repeatedly giving the ball away as TNS played a high press. Several moves broke down in their own half and resulted in TNS having chance after chance to score. There was a Lithuanian guy in front of us and his partner started laughing as me and my brother started shouting 'Nooooo!' as the Kauno defenders set up for another futile attempt to play out from the back. It was cringeworthy to watch.

Spending a week with family also meant there were opportunities for back garden football with an array of smaller people. My eldest nephew is getting pretty good these days - he graduated from his soccer course with three trophies a couple of weeks back. He also hits the ball harder than he used to and his Dad has had to reinforce the back fence, as you can see in this photo! 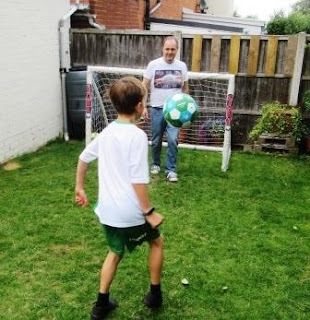 I will do a summary of our week in Shropshire in a future blog post, although our big days out were actually in Cheshire and Wales, so it will be photos from not-Shropshire in the main.