When I was studying Business Psychology I briefly got sidetracked onto a tangent about the psychology of collecting (blogged here). I think that offers a good insight into why some people obsessively go to football matches - often called 'groundhopping'. It's a collecting impulse.

People who go to a lot of football matches in a lot of different places tend to keep some sort of record of it, for example, in an Excel spreadsheet (I do this), or using an app created to help them, like the Futbology App (which I use regularly).

As an aside, Futbology was originally called Groundhopper, but apparently that had less of a cachet to it than the developers had hoped, so they changed the name.

The problem is if you have all this data, what do you do with it? Futbology has a neat feature where you can review your personal stats, looking at all the different grounds you have been to, and a list of all the clubs you have seen. But that only goes so far, and like a spreadsheet, it's not that exciting to look at. 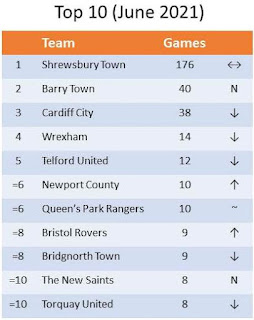 The big new entrant since the last time I posted a table is Barry Town, who weren't even in the top ten back in 2017. They are now second in the table, usurping Cardiff City, although I have seen the Bluebirds 18 times since I published my previous top ten. The New Saints are also new entries and are going to climb the table as well, given that I've already seen them twice since June!

Tables are all well and good, but I also have another project on the go. A long time ago, before we were married, even, Cathy gave me a 'Book of Days' as a present. 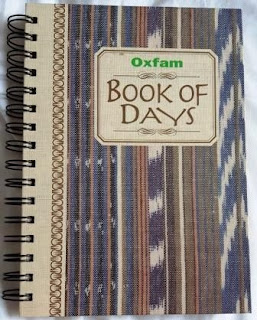 These are handy books that you are meant to write birthdays and memorable events in on given dates. I wrote a few in, but then it sat and languished in a drawer for two decades. Then a few years back I decided to go through my lists of football matches and fill in the book with all the games on the date I saw them. The result is something like this. 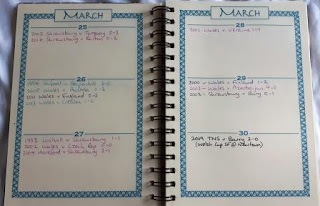 If you look closely, you will see that a number of those games on the pages shown are international matches because the end of March tends to be an 'International Break' every year. Most of the time I just write the score but sometimes I add in other details, as can be seen on 30 March, where I noted that TNS v Barry was a Welsh Cup semi-final played at Newtown.

It is fun flicking through the pages, remembering games. It's also fun when I get to 'tick off' a day like I did when I saw TNS in a Europa Conference League game at the end of July. 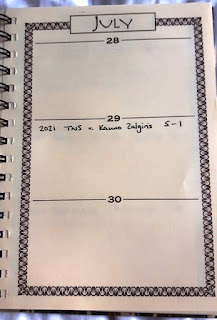 The days either side of that game are still blank. The challenge is on for 2022!
I've also taken the data from the Book of Days and put it into grid format, blacking out all the days that I have seen a match. The result looks a bit like an elongated QR code.

The gaps in the summer months are really noticeable in this data display. That one lone square in the middle of June is the game I went to in Salt Lake City when we were on our road trip around Utah. (Here is a very old blog post about that game!)
Meanwhile, back to the Excel Spreadsheet and one way I arrange my data is games by month. The white gaps in the middle of the above grid is also noticeable in table form, as a large numerical disparity. 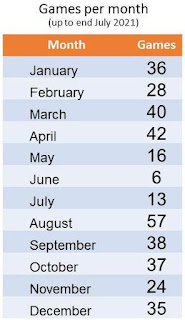 I have been to almost 10 times as many games in August as I have in June. Although I do watch a lot of games in June if there is a tournament happening. It's just that tends to be on TV! November and February are the months I'm less likely to go to a live game during the season. February is a short month (although I did manage a five Saturday February just before the world was pandemified back in 2020!). I don't know what November's excuse is.

One of the fun aspects of collecting is arranging and rearranging, cataloguing and organising your collection. Playing around with different ways of displaying the data from intangible collected items is the same impulse. I find a sense of satisfaction from looking at my spreadsheet's many pages, my Book of Days, and the blacked out year calendar, which is akin to looking through a binder of baseball cards, or a full football sticker album.

The challenge is on to "complete" the year!