Mining the myths - modern takes on the Norse pantheon 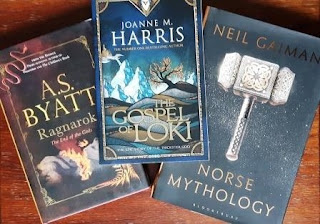 I've recently finished reading The Gospel of Loki by Joanne Harris, which is one of several books I've read over the past decade that have expanded on Norse mythology. It was a bit strange reading the book concurrently with watching the Marvel series called Loki on Disney Plus. It's a credit to Tom Hiddleston, the eponymous antihero, that I picture him when I'm reading a completely different book about Loki, the Norse god not the Marvel character.

The other books I've read are Ragnarok by A.S.Byatt, which I blogged about back in 2012, and Norse Mythology by Neil Gaiman, which I thought I had blogged about previously, but obviously I didn't get around to it. I'll also chuck in American Gods by Neil Gaiman, which takes members of the Norse pantheon and relocates them to the USA where they struggle to get by on the new continent because of a lack of believers. (I can't locate my copy, which is why it isn't in the picture.)

And then there is the Marvel Cinematic Universe (MCU), which includes the three Thor movies and the six-part Loki series, plus Thor and Loki have key roles in the various Avengers movies. Loki is central to Avengers Assemble as Thanos's agent to steal one of the Infinity Stones while Thor's character development, as he struggles to adjust to life after Asgard and failing to defeat Thanos, is one of the most memorable elements in Avengers Endgame, which capped off the first multi-movie arc of the MCU.

So, a brief synopsis of the source material

Thor, Odin, Loki and the other characters from the Norse myths are actually superpowered beings with various magical powers and abilities from a different world or plane of existence (I'm not exactly sure which it is meant to be). In this universe Thor and Loki are brothers, the sons of Odin, except Loki is actually adopted. Although the Thor films are meant to be about Thor, he's a bit of a dull character initially and Loki steals the show. Which is fitting as he is the trickster god. Loki's story continued this year with the release of a six part TV series on Disney Plus, which introduced a range of 'variant' versions of Loki from different timelines, leading into a multiverse scenario that will be the centrepiece of the next phase of the Marvel Cinematic Universe.

Myth-mining - borrows names, character traits and some of the mythic storylines, such as the end of the gods at Ragnarok for one of the films, and recasts them within a science fiction comic book universe. If there was anyone who took the mythos seriously, Marvel would be getting complaints about cultural appropriation.

The Gospel of Loki

This retells the various Norse myths from the perspective of Loki who is, as expected, an unreliable, dishonest narrator who blatantly positions himself as the wronged victim. The various gods are portrayed as clueless and vain, obsessed with power and prestige and unwilling to share their wealth with anyone else. There is some depth to the world that Joanne Harris creates, with runes carrying magic and therefore being the tools by which the gods can create and some other contemporary touches to how the characters interact.

Myth-mining - this stays relatively true to the source material, injecting humour into the stories as Loki tries to explain his mischief was actually quite funny, if only the other gods were intelligent enough to get the jokes.

Norse Mythology is a fairly straight retelling of the Norse myths in contemporary English. It does exactly what it says on the cover. I found it a dull read, which surprised me because Gaiman's work is usually anything but dull. American Gods meanwhile, has versions of the Norse gods seeking to establish themselves in America, against the tidal wave of new gods being created in American culture. Within this framework, Odin is a wily conman, Loki is a similarly shifty lowlife, Thor has committed suicide and Baldur has forgotten who he is. Other gods from other old world mythologies are also surviving in the shadows of the new American cities, imported to the new world with their believers who emigrated there (or were taken against their will). The Norse gods are the old world gods who have been there the longest, arriving with the Viking adventurers that discovered Vinland and then clinging on in a liminal existence ever since. The book concludes with an epic battle between the old world gods and the American gods.

Myth-mining - As a straight retelling, Norse Mythology is as close to pure Norse myth as could be imagined. American Gods, however, develops the characters in unusual ways but with a solid basis in the original myths - Norse, African, Egyptian, Eastern European and others.

The premise of this book is someone writing about how they discovered the Norse myths and how those myths got them through tough times as a child, when they thought the world was ending. It was a very clever vehicle for retelling the myths and exploring their psychological impact and appeal. There is also an essay in the book that tries to draw some life lessons from the stories and make them relevant to current issues, particularly drawing a parallel between the impending doom of Ragnarok, that the gods knew was imminent yet were powerless to prevent, and the damage being caused to the world's climate that similarly seems to have powerful people acting obliviously and ignoring the predictions of catastrophe. That really stuck with me as an illustration.

Myth-mining - The stories are retold faithfully, while intertwined with original material, which helps make them more real and important.

I don't think it's coincidental that these writers and creatives are drawn to using these myths in their own work. The stories of the Norse gods are stories about how wielding power contains within it self-destruction, how trying too hard to preserve something hastens its loss, and how actions that seemed like a good idea at the time often have unintended consequences. The gods respond to the threat of Fenrir, the wolf destined to swallow the moon, and seek to neutralise the threat, which only drives Fenrir further down a path of madness and destruction. Odin hoards knowledge, worried what will happen if it gets into the wrong hands, only to find that the other gods embark on courses of action that are damaging anyway.

These are all powerful, seminal themes. Love, hate, pride, ignorance, valour, courage, selfishness, heroism, nihilism, betrayal, honesty, and many more very human traits. The "gods" in this fiction are just humans writ large, which is why we can learn from them. That's probably why these story-tellers feel it is worth retelling these tales.