Recently we have had some Islamic 'tracts' pushed through our letterbox. Over the years we have often had Christian material delivered, but Islamic leafleting feels new (although we did have some last year, which I blogged about). It makes me wonder if whoever is distributing these Islamic tracts has seen Christians doing it and thought it would be a good idea to emulate.

There was a particular design choice that caught my eye on one of the most recent leaflets. It stood out for two reasons. Here's the leaflet in question: 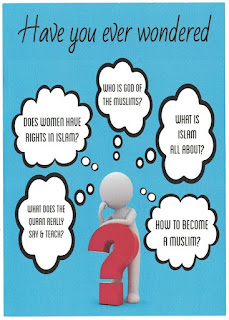 It was the little dude with a big red question mark. Firstly, I'm pretty sure that is a stock piece of clip-art. It looks like the kind of thing that features in bad PowerPoints. But secondly, the red question mark is a key design component of the Christian evangelism course called Alpha. That really does feel a little bit like trading on another religion's prosetylisation tool.
In answer to the rhetorical questions, the answer is 'No, not really.' But, if I had wondered, there was a QR code on the back that would connect me to a website where I could "Ask a Muslim" any questions I had. I am a bit curious to know whether anyone activates the QR code - that's trackable and could inform us whether anyone responds to getting a religious tract through the door. Ever.
This tract didn't come alone. It also came with this list of instructions from God to humanity lifted from the Qur'an. The QR code on the back of this one would have taken me to an online version of the Qur'an. (Would that make it the QRan?) 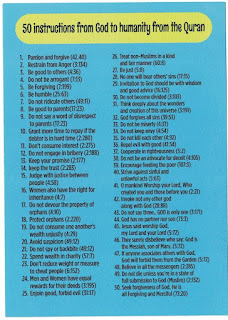 Some of the instructions aren't particularly direct. It felt to me that they had decided they needed to have 50 and then were stuck trying to reach that number. Maybe 50 is an important number in Islam. I honestly can't recall hearing that before though. Or perhaps they are trying to be five times better than religions that only have ten commandments?