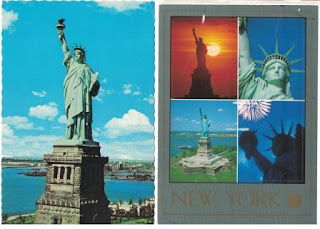 So, that's March done and dusted. We are one quarter the way through 2021, and definitely a year into the pandemic now. On that note, the big personal pandemic-related event for me in March was being invited to have a Covid vaccination (blogged about here).

March also marked the one year anniversary of my work team's hasty "temporary" departure from our office when we discovered the ward above us was where all the patients with Covid were being parked. In the past year my team has successfully transitioned to working from home and we even had a meet up on the Spring Equinox for a takeaway cup of coffee and socially distanced walk.

There has been a slight loosening of the various Covid restrictions and that meant I was able to get a hiarcut for the first time since October! I needed it.

For a couple of days before my trim I kept singing "Goodbye, Lockdown Hair!" to the tune of Candle in the Wind as I walked around the house. It amused me if nobody else. It was so nice to have a cold neck again after my trip to the barbers.

The 21st March was Census Day. One big change for me compared to ten years ago is that I said that I was a Welsh speaker. It's funny to think that potentially a researcher 100 years hence will read my records and see that I went from not being a Welsh speaker to becoming one. I don't get to use my Welsh as often as I really should if I want to maintain my fluency. I want to attend further classes, but I found the Zoom version of Welsh classes less enjoyable, so I'm waiting to see if it will be possible to continue in real life classrooms any time soon.

Zoom is a fact of pandemic life, though. I've been a member of the British Thematic Association, which is for all 'thematic' stamp collectors, for several years now. I've helped them start running Zoom presentations for people to talk about their collections over the past few months. In March I was the presenter, talking about my collection of stamps featuring the Statue of Liberty.

My presentation included the two postcards pictured above, which had a personal connection. Cathy sent one of them to me, which was part of the impetus that got me focused on collecting the Statue of Liberty on stamps. I enjoyed presenting, but there was a bittersweet aspect to it when I dug out my collection and found some notes that my dad had written to me about some of the stamps.

The notes from Dad were poignant as we also saw the two year anniversary of his sudden passing. It was also the one year anniversary of my friend Ben's death, who died a year to the day after Dad. (This photo of me and Ben was taken on Shrewsbury Town's first trip to Wembley in 2018 - a very wet day and a defeat in the Associate Members Cup final.) 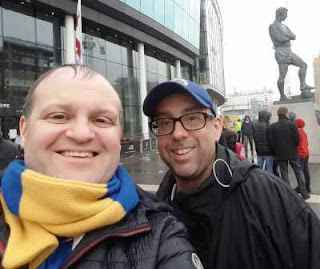 On the one year anniversary of Ben's death a lovely online memorial service was held. We were sent an order of service beforehand and it included a fragment of poetry that Ben really loved. It feels like a fitting way to end this monthly report. 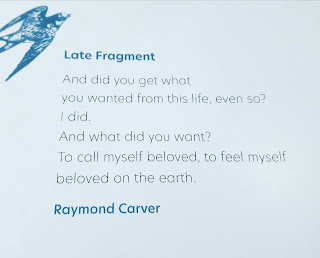