When religion and politics intersect

Political discourse took an interesting swerve over Easter. The Conservatives put out a meme poster on Good Friday that caught my attention. 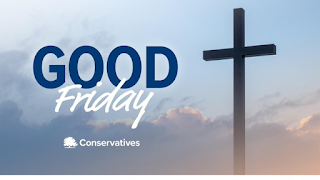 From a theological point of view, the use of an empty cross to mark the day the gospels report Jesus was crucified, is slightly ironic. From a political point of view, the symbolism is equally as empty. I was left feeling this was posturing along similar lines to the insistence on Union flags being flown from government buildings and being in the background of Zoom interviews. It's a nationalist tangent trying to link in to a cultural heritage of being a 'Christian country'. The Tories were trying this ten years ago (I blogged about it angrily then), and it's making a reappearance.
The linking of politics with religion is often included in lists of 'signs of fascism'. So it wasn't a surprise to see comparisons on Twitter of the Conservative meme with Nazi propaganda. 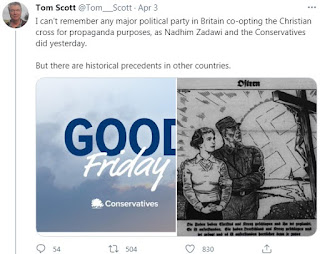 Previously, there have been British political parties that have tried to co-opt Christianity for their cause. This is one such example: 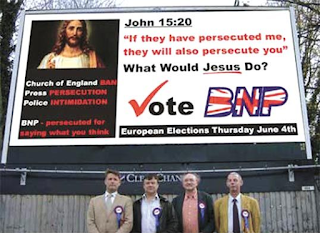 This poster campaign was some time ago now. The BNP has disappeared, outflanked by UKIP, the Brexit Party and the Conservative Party, which seems to have moved to the right with each passing election.

In a way, this intersection of politics and religion feels almost inevitable after the power demonstrated in harnessing the white evangelical vote by the Republican Party in America. (75% of white evangelicals voted for Trump last year; the theological label is practically synonomous with Republicanism now.) The recent Conservative electoral success has been driven by following the right wing American playbook and the government are doubling down on it. So it's only natural that they would eventually come and try to claim religion.

But not to be outdone, Labour leader Keir Starmer decided to do a publicity piece for Easter by visiting a church. 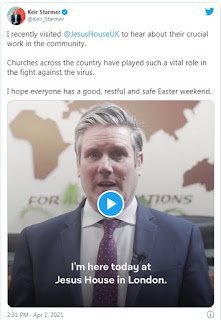 In his (now deleted) video, Keir describes the way the church in question, Jesus House, a large, black majority Pentecostal Church in London, has supported people during the pandemic, including recently hosting a vaccination centre.
This caused a slight problem for Keir, though. Jesus House has a track record of opposing LGBT+ rights and is accused of promoting "conversion therapy" to "cure" gay people of being gay. Conversion therapy is controversial. It's often likened to torture.

As can be imagined, this visit did not play well with Keir's support base. Here's an example. 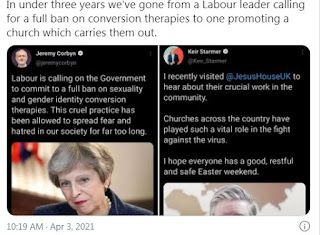 It's surprising that Keir didn't know there could be controversy attached to this visit. Both Theresa May and Boris Johnson were criticised for visiting Jesus House, for exactly the same reason.

I'd put Keir's mis-step down to religious illiteracy. I get the sense that some politicians see "religion" as some kind of old fashioned benign relict of days past, acting as a stable force for good in society. But not all religion is like that.
Keir may have thought he could go along for the photo opportunity and praise the way Jesus House is hosting a Covid vaccination centre, and that would be it. But 'pick and choose' is a difficult game to play with religion because fundamentalism is a complete package. A politician can try to separate out religiously-motivated activity they agree with and activity they don't, but an unequivocal endorsement of a church implies endorsement across the breadth of the espoused creed.
For the fundamentalist evangelical church in question, supporting people during the pandemic and their opposition to marriage equality are both motivated by their belief system. There is no way of differentiating between the two in terms of where they come from. From their perspective, the wellspring is the same - trying to 'be true to the Bible'.
In his subsequent apology, Keir says he didn't know about Jesus House's opposition to LGBT+ rights, and that it was a "mistake". He took down the video on Easter Monday.
I predict there are going to be more attempts to use Christianity as a political weapon. The Conservatives have been cynically smarter in just co-opting Christian symbolism without the burden of having to endorse any activities motivated by a belief system. It's a fundamentally empty appeal to a sense of "Christian" without having to pick their way through the specifics of a creed.

They did it again on Easter Sunday. 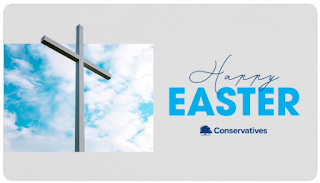