On Easter Sunday we went out in the sunshine to Victoria Park in Canton. It's one of Cardiff's bigger parks, with a big play area, a splash park, lots of trees and flowerbeds and a caff selling ice creams.

It also has a statue of a onetime resident of the park, Billy the Seal. We took a selfie with him. 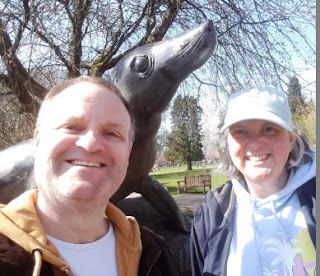 Billy was discovered in with a catch of fish when a trawler docked in Cardiff in 1912. He was subsequently kept in a small pool in Victoria Park where he lived until 1939. After he died, it was discovered that actually Billy was a female seal. Her skeleton is now on display in the National Museum of Wales. Billy was later the subject of a song by folk group The Hennessys, who also wrote a song about The Grangetown Whale. 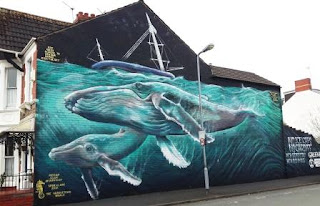 But back to Victoria Park, I really liked this yellow tulip that had snuck into a bed full of pink tulips. How to make sure you stand out! 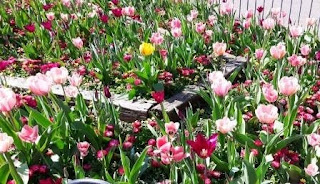 And we also saw this, which I have on authority from my friend Sarah, is a squirrel nest. But to us it looked like Groot when he extends himself into a ball to protect his friends at the end of Guardians of the Galaxy. 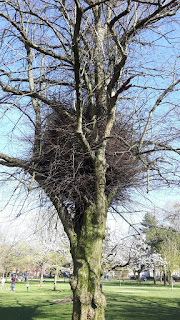 On that cultural note, we bade farewell to Victoria Park. Until next time.
Posted by Jongudmund at 07:59