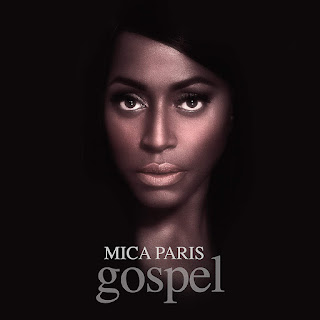 Recently I was in a shop and heard a song I liked, so I googled it and discovered it was a song released by Mica Paris in 2020. I played it a few times online and still liked it, enough to add the album, called Gospel, to my wishlist. It subsequently became a birthday gift from Ian and Viv (thanks guys!), and I've given it a few listens since.
In the sleevenotes, Mica talks about how her voice has matured and fits into the gospel sound. The album is about hope in a troubling time (which is one way of summarising 2020) and she says how she hopes it will uplift and encourage people.
The song that introduced me to the album is an original track called Mamma Said. I really liked the line "Don't you know your darkest hour is only sixty minutes long." (Here's a YouTube link.)
There is another original track on the album, along with a mix of ten other hymns, spirituals and covers. The spiritual I found most interesting is Go Down Moses, probably because that's not one I know very well. Oh Happy Day is delivered well too. A slow-paced version of Amazing Grace doesn't add much to the album though, possibly because I'm overly familiar with it, but mainly because on an objective level it's actually a pretty dull tune. Motherless Child is a traditional spiritual and I like this version, although I prefer the version sung by Darius Rucker on a different covers album.
The covers include (Something Inside) So Strong, I Want to Know What Love Is, and A Change is Gonna Come. Mica offer perfectly reasonable versions of all of them. There's also a cover of Human by Rag'n'Bone Man, which is probably the most recent track to be featured. That's a fairly well-covered song now, but I like this version.
The best cover on the album, though, is I Still Haven't Found What I'm Looking For. I've always loved that song, ever since I started listening to U2 albums back when I was a teenager. It still resonates with me. Bono has joked in the past that he likes it when people who can actually sing cover the song. Mica sings it really well and it's easily the next best track on this album after Mamma Said.
Overall, I think this is a great album. If Mica releases more albums in this vein, then I'd definitely be interested hearing them.
Posted by Jongudmund at 10:31