Snack of the Month - Choco Boy

We are almost at the end of March, so here is a late 'Snack of the Month' post. It's a sweet snack for a change this month. I bought these in the foreign food aisle in Sainsbury's. I think they are from Korea. I must admit I picked this partly because of the cartoon character on the front. 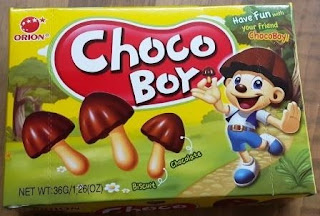 Inside the box is a small plastic packet with several of these tiny mushrooms in, which I presume are the Choco Boys. The biscuit stalks taste a lot like the biscuit sticks found in old school KP Chocolate Dips. The chocolate is sweet and milky. 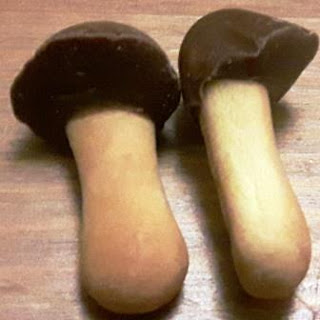 There aren't many Choco Boys in the packet so they got polished off quite quickly. I liked them, but they weren't so amazing I would look them out again. I also felt it could have come with a sticker of the Choco Boy character, or something, because the actual biscuits were a bit dull compared to the happy little chap dancing on the front of the box. (Even though, thinking about it, he look like a Choco Boy and he looks like he's about to eat a tiny version of himself.)

Email ThisBlogThis!Share to TwitterShare to FacebookShare to Pinterest
Labels: Choco Boy, chocolate, snack of the month