A sudden departure - losing my Dad

Tomorrow it will be 13 weeks since my Dad unexpectedly died. Given that means it's been a quarter of a year since that Tuesday night, I feel I want to get some things out and down in type. I'm still trying to get used to a life where he is no longer an active participant. It's quieter. 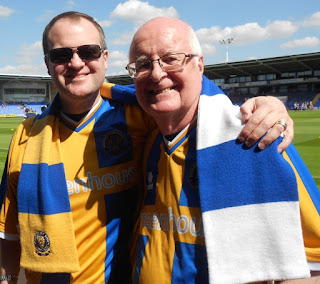 Tuesday 19 March: I was in Pizza Hut. I'd left my phone charging at home. I'd even made a big deal out of that, joking with Cathy that she would have my undivided attention. Towards the end of the meal, she said she had an odd text message off my brother, Dave, asking if she knew where I was. I had a pang of guilt. A few weeks earlier Dave had asked me to pay the balance on a fishing weekend we had booked. I hadn't paid it. He was probably reminding me.

Cathy passed me her phone and I called Dave. "Hey, what's up?" I asked.

I went numb. I don't know what I said before I ended the call. Cathy came back to the table. I told her. We left the restaurant and drove home, packed a couple of suitcases and drove up to the family house in Shrewsbury. Dave was waiting for us with Mum. An hour or so later my foster sister Sarah arrived from Edinburgh.

Dad had fallen backwards down the stairs, and hit his head. The trauma of the injury meant he died within minutes. He may have been alive when the ambulance crew loaded him into the van, but he was dying as they did so.

We still now aren't a hundred per cent sure what caused Dad to fall the way he did. If, as the most plausible hypothesis goes, he blacked out due to low blood pressure, he wouldn't have even known he was falling. There is a minuscule comfort in that his experience of dying was no experience at all. Minuscule.

This is the first time I've experienced a sudden bereavement like this. I've got more to say about "sudden" death, but maybe that's for another post.

The next few weeks passed rapidly. Funeral arrangements. I gave a tribute at the service, and felt happy with what I said. But the euphoria of those moments, which carried me so far, has worn off.

Rapidly we experienced some "firsts". I went to my first Shrewsbury Town game without him, and felt strangely insulated from the emotions around me. None of it mattered and I felt strange seeing how much people invested emotionally in the event. We had our first family celebration - Mother's Day - and then a few days later I had my first birthday without him. We had Easter together as a family, and then recently I went with Mum and Cathy to Llandudno on what would have been his 75th birthday.

Those 'firsts' are all things we saw coming and planned for. There are other things that are unplanned. I didn't expect to feel a pang of grief so strongly after the FA Cup Final, realising this would be the first FA Cup Final that we wouldn't dissect afterwards. Growing up FA Cup Finals were always a big deal. We would watch them as a family, and Dad would run a sweepstake. After the game we would walk over to the local newsagents and whoever won would get to choose a box of chocolates, which we would all share. It felt like every year Mum won, and always picked Cadbury's Roses. If I'd won I would have picked Quality Street.

And this year, after Manchester City bulldozed Watford, swatting them aside to a joint record margin of victory in an FA Cup Final, there was no phone call; no conversation. I felt desperately sad.

I feel sad at the moments that are lost. I wanted to take Dad to Jenner Park to see Barry Town play. We'd talked a lot about them as I'd been watching them this season. But we never got round to it. I wanted to go with him to Birmingham and see all the places he talked about in his stories - the churches he went to and the medical school, and revisit our old house. But it feels like all those memories are lost. He'd talked about us going to Snowdonia and climbing the last few mountains he had yet to tick off. Honestly, I don't think he was well enough to do that, but now it definitely isn't going to happen.

A few weeks after he died I was ambushed by a voicemail he had left on my mobile. It felt strange to hear his voice, confirming some plans for the big birthday party that he never got to see. I wanted to record that message and save it, just to hear him fussing about details again - he always wanted to check the details. But then a few days later I went to play it back and the message had erased. They only get saved for thirty days, which I didn't know. It felt suddenly raw and real, like I had lost him all over again. You can't plan for those moments.

So after 13 weeks it's slowly becoming reality. Life without Dad. Sometimes I just feel tired of it all. Sometimes I just want to tell him something interesting I found out. He used to tell me that he prayed for me every day. A few weeks after he died I thought 'Who is going to pray for me now?' It's not even that I particularly want anyone to pray for me, just that I don't know if anyone does.

A friend warned me that grief is exhausting, and she was right. Even when I'm absorbed in work, or a book, or the internet, or a film, it's something tiring that I still carry with me. (I can't unhear the crack in my brother's voice.)