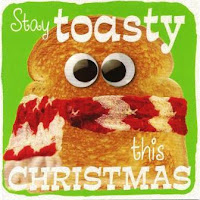 For the past four years I have reviewed the common themes that appear in all the Christmas cards that Cathy and I get sent. This may seem a bit sad, but I get a lot of interested people talking to me about it. Someone we know who sells greetings cards for a living finds it interesting enough to talk about with her company. (And even to the point of doing her own audit!)

Anyway, apparently this has prompted a discussion regarding religious themes on cards and how they break down. The director of my friend's company has proposed the following: "The breakdown of religious v secular is always revealing, although there is a marked difference across the ages with the more serious 'I'm making a statement' religious cards falling in popularity against the more cartoony 'I just think this is a sweet image' religious cards."

My friend then added her own thoughts: "I was probably one of those 'got to make a statement' people until very recently and only sent 'religious' cards. I used one design for everyone. Now I send a mix, and think a bit more about what image I'm sending, often sending Christians Christmas themed cards but also to non-Christians too." (By Christmas themed, I think she means the less religious aspects of Christmas.) 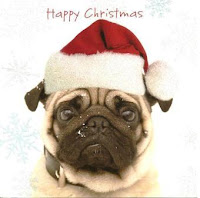 For the purpose of this survey I am going to define 'religious' people as people who I know are 'regular church-goers' (RCGs). There are a lot of people out there who would tick Christian in the census, but don't seem to have much more of a religious commitment than that and probably wouldn't regard themselves as religious.

To understand the data a bit better, I also need to know the kind of people sending cards. The age-range is between 4 and 96. There is a mix of ages in every decade between them, with a higher proportion of people over the age of 50. There are a large number of family members and friends from a variety of social backgrounds: school, university, current and former workplaces, neighbours, the church we attend, and former churches we attend. So, this is a wide mix of people, including a large number of RCGs, making it an ideal field to draw on to test the idea that religious people are more likely to send religious cards and to see if there is a difference based on age. I'm going to break it up into the following age groups: children, 20-40, over 40-60, over 60-80 and over 80.

As I've got the opportunity, I'm also going to add in a more in-depth breakdown of the kinds of messages on the front of cards (something my friend did in her audit). I've already noted that the trend in 2015 for religious themed cards to be less likely to use the word 'Christmas' on the front followed previous years. But there are carols, Bible verses, and other messages, which are as interesting to record. I am also going to log how many are 'personal' e.g. 'To a special son/ husband/ uncle' etc. I should say at this point that Cathy helped with the data analysis, so from hereon in I'm going to use 'We' and 'Us'.

So here goes. Firstly a breakdown of who is more likely to send which types of cards. We divided the cards four ways according to whether the sender was an RCG or not, and what theme it was. Two cards were discounted as they weren't from individuals (one was a church and the other was a company). Here's how the numbers divided up: 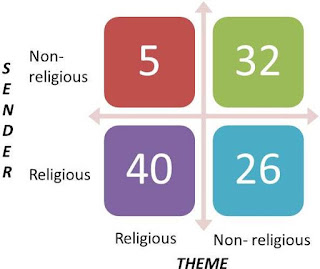 We had very few 'cartoony' religious cards - just six in the whole sample, which probably renders the second hypothesis inconclusive. Here is the breakdown of who our of our sample sent which kind of message.

Pretty much all the religious cards we received were serious. The table shows that the odds tip towards religious cards as the age of the senders increases, but in the oldest segment there is almost a half and half split between religious cards and non-religious cards. As mentioned there were only six cartoony religious cards, and they were in the two younger adult brackets (adults between 20 and 60).

Looking at the messages on the front of the cards then, we find the following breakdown: 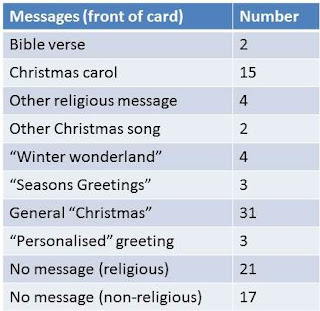 And, a final table... This shows the sender age compared to the type of religious message likely to be included on the front of a card. 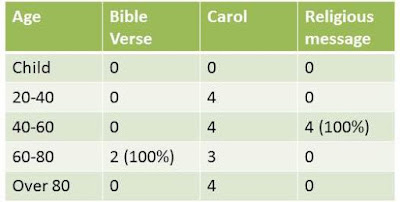 Again, we are dealing with small numbers, which kind of skews the data. But you can see that all the generic religious messages fall into one age bracket and both the cards with Bible verses on the front were sent by people in the age 60-80 bracket. The cards with carols on the front were sent with a near-as-makes-no-difference cross-sectional split across the age ranges.

One final note, because Cathy was interested in this, we counted up the charity cards by sender type. We found that 40 RCG senders sent charity cards, compared to 20 non-religious senders. Given that in our sample there were twice as many RCGs as non-RCGs, this implies religious belief makes no difference to the choice of buying cards that support a charity. Which is quite a finding! Cathy also wanted to know whether there was a greater trend towards buying charity cards in a supermarket in a given group. We had 10 supermarket charity cards from RCGs (exactly a quarter) and 9 from non-RCGs (almost half). Quite what this means is less clear, although it shows that supermarket charity cards are a good fundraising mechanism.

So, there you go. I have one more analysis of the data to come, fueled more by interest in theology than anything else. But this has been a long post already, so it will have to wait!
Posted by Jongudmund at 21:23