I live in a terraced house and that makes it very easy for people to deliver leaflets. We get numerous flyers through the door every week, and, being interested in marketing communications, I usually look at them critically. I know that might seem harsh but I don't ask them to stick their material through my door. So that makes it fair game.

This takeaway menu came through the door recently. I think it makes a few mistakes. 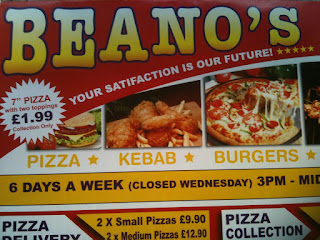 One of the key lessons of proofreading anything is always check the headings and sub-headings. That's where I've come unstuck in the past. Ooh, "Satifaction". Right there in the tagline. From experience, I know I would feel physically sick if I'd missed that.

I hate it when I make that sort of lapse because I feel it makes me look unprofessional. But the typo isn't the worst thing about that phrase. In fact, I probably wouldn't have considered the phrase at all if it didn't have a typo, as it's essentially meaningless.

For a takeaway food outlet's slogan. I'm not sure what it's saying. It's trying to be all about the customer by saying 'your satifaction', but then it's also all about their business. First rule of marketing: WIIFM - what's in it for me? Well, what is in it for me? Why should I care about your future? Why is that going to make me choose your takeaway over the many others that post leaflets through my door? (So many others!)

WIIFM is rooted in neuroscience. We know that the sub-cortex is very me-centric. It's the place where our survival instincts are located, which is why it exerts such an influence over our decision-making. Which is why customer-centred marketing almost always works so well - it appeals to the non-conscious part of the brain that makes snap decisions. 'This is about me. This will be be good for me. I want this.' You don't even think those thoughts. The brain decides without consciously thinking about it. 'Your satisfaction is our future' doesn't appeal to that part of the brain at all. It's a nice, bland, generic promise of good service based on wanting to please you. But it doesn't appeal as much as say 'Hot food at your door when you want it' would.

Also, if we were going to be really hard on the producers of this leaflet, why does it say 'burgers' under a picture of a pizza and 'pizza' under a picture of a burger? That's just an added layer of confusion on top. Most people will know what those things are, so we could question whether they need labelling at all. But if you are going to label things then really they should be labelled correctly.

Mislabelling things like this introduces incongruity into the message that is being communicated. While this might be at a very basic level - probably below the conscious level - the decision-making part of the brain will pick up on it. Deep down humans don't like incongruity. It triggers that survival instinct again and so we subconsciously reject the things that don't fit as possibly dangerous.

Of course, food from a takeaway might be intrinsically dangerous, either in the short term with an upset tummy or in the long term with obesity problems. So, maybe this incongruity is doing us all a favour.
Posted by Jongudmund at 07:56