2015 in review: Books I read by Douglas Coupland

I've been logging (and rating) the books I read for a number of years. In the past I've listed the ones I've given a five star rating to (five being my arbitrary maximum), but I haven't listed my yearly reading for some reason. So, here starts a new tradition!

I've grouped these in rough categories rather than list them in order. I've read six Douglas Coupland's novels this year, so he has his own post to kick this off, for no other reason than it's my blog and I can do what I like.

Miss Wyoming
Susan Colgate is a reluctant beauty pageant winner who gets a chance to escape from her monstrous 'pageant mom' when her plane crashes and she can walk away. When she returns to public life a year later she attracts the attention of a film producer who went through a similar process by giving all his possessions away. It's an interesting study of how success ends up owning you. I wouldn't rate it as one of Coupland's best novels, but it was surprisingly upbeat and ended on a more hopeful note than most.

Life After God
This isn't really a novel; more a collection of sort-of fiction that kind of ties together. It was full of amazing quotes. I listed some here. One became the opening lines of a sermon in the summer. 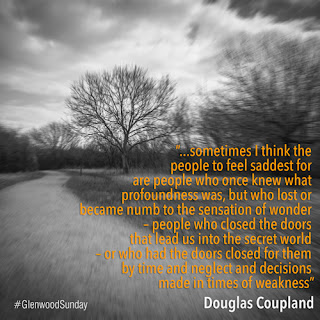 Hey Nostradamus
This was devastatingly beautiful. It's really four stories, starting with the victim of a high school shooting who is secretly married and pregnant. Then it cuts to her secretly widowed husband several years later, then to his new partner, and finally to his religious fanatic father. I found it profound in its analysis of the way the pursuit of religious holiness ends up corrupting people and turning them into terrible human beings. This quote stood out: "There can be an archness, a meanness in the lives of the saved, an intolerance that can colour their view of the weak and the lost. It can make them hard when they ought to be listening, judgmental when they ought to be contrite." (p.28) I also used a quote from this book to begin my tribute to my Grandma at her funeral.

Worst. Person. Ever.
This was fantastically funny and vulgar. Raymond Gunt is a freelance TV cameraman and literally the worst person ever. He regards himself very differently, of course. Given the opportunity of a wonderful job in a tropical paradise he jumps at it, but then falls victim to a sequence of amusingly horrible events, many of them caused by his own terrible personality, which makes his suffering very enjoyable to read. Very different from Coupland's other novels, but brilliant.

All Families Are Psychotic
This is probably the maddest Coupland story that I've read, a real whirlwind of twists and shocks. A female astronaut is waiting to blast off on a shuttle mission, while her utterly dysfunctional family try to make their way to the launch site. The astronaut's mother is the most interesting character with a fairly nihilistic take on life. Throw in an eccentric European multi-millionaire, a cure for AIDS, and hijinks with crims and it remained unpredictable right to the end. Not my favourite of his novels, but pretty good.

The Gum Thief
Roger works in Staples. He's in his early 40s and the reason he works there is simple: his life has fallen apart. His much younger co-workers become the inspiration for him to start writing a novel. Weaved into the novel are several of his real-life experiences. One stand out thought was "Where does personality end and brain damage begin?" (I've thought that about a few people since reading this.) I really quite liked this book. It moved at a more relaxed pace than All Families Are Psychotic (thankfully) and made me think a bit. If I had one criticism, he has a character leave North America to go and visit Europe, which he's done in previous books. I know it's to make juxtapositions and take the characters out of their comfort zones, but does it always have to be Europe? And if it does have to be Europe, does it have to be London or Paris or wherever? Why can't it be Wales or another lost corner of the old world?

If you only read one of these... read Hey Nostradamus. Particularly if you are of a religious persuasion.