Yes, it's my monthly review of the month just gone, which serves as a both an online journal and an announcement that I'm still alive. The pandemic seems to have abated somewhat and places are opening up. However, attending a football match is still off-limits in Wales (unless your team plays in the English system) so I wasn't able to go to Barry Town's final game of the season - the post-season play-off for a Europa League qualifying place.

This actually marked the first time where I really disagreed with the restrictions. 150 people were allowed in the Barry Town clubhouse to watch the game live on TV, but none of them were allowed to go outside and stand on the terraces to watch the game. I have been supportive of the rules restricting movement throughout the pandemic, but this just felt arbitrary and stupid.

But anyway, that's enough about what I didn't do in May. What about the things I did do? Well, the month kicked off with an election. Here we are outside our local gorsaf bleidleisio, having voted. 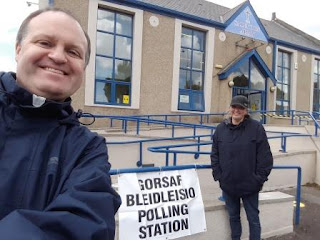 The election returned more than expected Labour Senedd Members, with enough to form a workable government. I blogged about the result here. There was a shift away from the more reactionary right wing parties, which either indicates a decline in popularity for that sort of politics, or that the Conservative Party has regained the support from that wing of society. (I think it's more the latter.)
One additional aspect to the new Government is that there was a reshuffle in the cabinet and we have a new health minister. It's not yet apparent whether that will mean any changes in health policy, or knock-on effects for the NHS, but at least it means that things that have been on hiatus for ages can progress now.
We also made the most of easing travel restrictions to visit family, including timing a visit to Shrewsbury to see my sister and family for the first time since Christmas 2019. My twin niece and nephew were 6 on the day we saw them - we hadn't seen them the entirety of the year they were 5!
Due to the changeable weather we had to shelter under some gazebos, but at least that meant we got a pic! 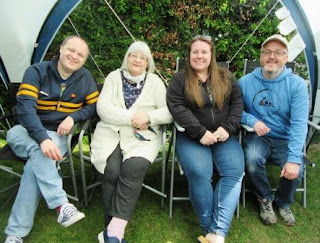 I also showed off some of me back garden football skillz in true 'cool uncle' style.

The second time we went up, we actually stayed the night. It was the weekend when it would have been my dad's birthday on the Sunday. It was nice to be with mum and the rest of the family for most of that day. We also had a little walk out to a nearby pool, where we saw a gazillion tadpoles. 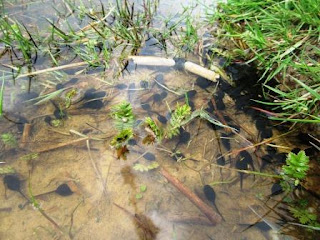 I have almost stopped reading anything during the pandemic, but I did finish one book in May. It's a very short collection of op-ed pieces by George Orwell. 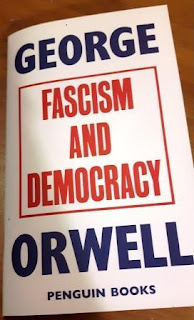 As ever with Orwell's take on contemporary issues, there are several pithy comments, many of which resonated with me. I'm planning to get around to blogging some of them soon.
I'm still writing, though. This month marked the one year anniversary of my blogging project about baseball cards.
In an exciting development I sampled McVitie's latest foray into different flavoured jaffa cakes. Personally I didn't like these as much as some of the flavours I tried earlier in the year. But I did like the purple-hued packaging.

And that wasn't the only exciting purchase I made. Right at the end of the month, Cathy and I called into the newly reopened Firestorm Games and I bought something I'm very excited about. But that's going to wait for a post all to itself!
Posted by Jongudmund at 21:29