Well the election took place last Thursday. Most of the results came in on Friday and the final couple of regional lists were counted on Saturday. We had one more leaflet arrive after I published my review last week. It was from Labour and took them into the outright lead in terms of literature. 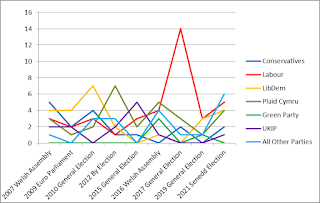 For the first time in my chronicles of election bumf there were more leaflets from "other parties" combined than from the main contenders. That included the Abolish the Welsh Assembly Party who were trying to become main contenders.

There was an uptick in leaflets from all the main parties compared to the 2019 General Election when it feels like nobody was really trying. UKIP reappeared on the radar this time, although that might well be a 'dead cat bounce'. In fact, that is one of the most interesting aspects of this Senedd Election - the absolute failure of the right wing parties to score seats.

In 2016, UKIP gained 7 seats, mainly off the regional lists. The EU referendum was the big thing that year, with a month to go. However, since then those 7 Senedd members have fallen out with each other multiple times, sitting as 'Independents' or representing other parties. Hence why there were sitting MSs from Abolish the Assembly and the Brexit Party when the Senedd dissolved for this election.

The funniest comment I saw on Twitter about the right wing collapse was that Abolish the Assembly wanted to get rid of Welsh democracy, and then Welsh democracy turned around and voted to get rid of Abolish the Assembly. They claim they will be back but it's hard to imagine them surviving five years without a base in the Senedd. Meanwhile UKIP did incredibly poorly, and Reform UK, which was the Brexit Party two years ago, similarly made little impact.

UKIP, Reform UK and, to an extent, Abolish, were all pushing the same main policy point - get rid of the Welsh Parliament. But the original primary reasons that drew people to UKIP and Reform UK, the push for Brexit, have been robbed from them by the Conservatives. If people aren't happy with devolution and Wales governing itself within the current limits established by Westminster, then the Welsh Conservative Party are firmly Unionist and the natural home for the regressive right given their current stance on immigration, the EU, foreign affairs, and London calling the shots in the United Kingdom.

Certainly, I would interpret the rise in seats for the Conservatives as hollowing out the hard right wing party vote, and combined with the infighting and rebranding and, let's be honest, toxic personalities involved in those hard right parties, those Conservatie policy shifts were enough to capture the voters they had previously bled to the right.

So will any of these parties be sending me bumf in the next election? I wouldn't bet on it. But who knows? The regularity of elections these days mean we are probably due a General Election soon enough. We will definitely be getting one in 2024. The next Senedd election will be in 2026 unless something totally unexpected happens.

Meanwhile, a wad of leaflets are going in my recycling bin tonight!