With less than a week to go to the Senedd Election, here is a review of the political literature we have recieved so far. I introduced the scoring template in a preview post, but to recap, parties earn points for SMART goals, the number of leaflets, being bilingual, contact details, candidate photos, and endorsements. Parties are docked points for vague objectives, throwing shade - 1 point per target, photos of politicians from other parties, photos of the area that don't include the candidate, stock photos, and typos. I'm also going to list "pandemic points" as a possible tiebreaker. 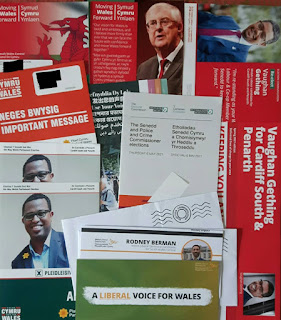 As of this post we have received 20 pieces of post so I am going to list them by most leaflets then alphabetical order, which means we start with Labour.

Number of items: 4. 2 of them are general for the list votes and 2 were from Vaughan Gething, the constuency candidate. Only 2 were bilingual, so 6 points

SMART goals: 3 points - not many, as the leaflets tended to focus on what "Welsh Labour has delivered" rather than making promises. I like the idea of a new national forest - and that's a measurable goal. We will either have one or we won't.

Contact details: a total of 10 ways to get in touch with either generic Labour or Vaughan himself.

Relevant photos: 10, including lots of Vaughan in the consituency. All 4 regional list candidates had pics. Including the one called Mr Death. (He's never going to be health minister, is he!)

Endorsements: 6 different ones. Vaughan got an endorsement off Lynda Thorne who is one of my local councillors who has been very helpful in the past.

Vague objectives: -7. Including to make Wales "a greener country".

Shade: -2. Main targets are the Tories who get unfavourable comparisons across a lot of policy areas. Plaid Cymru apparently "want to put up barriers to our neighbours just over the border".

TOTAL = (35-10) = 25. I think this is the most points Labour have ever scored in one of these rundowns. True, they racked up the easy points with the contact details, but overall their literature is a lot more positive than it has been in previous campaigns. If there was more detail to their goals they would have scored even higher.

Pandemic Points: 10! Vaughan Gething mentioned it a lot in his 2 leaflets. But then he is the health minister so I think that's reasonable.

Number of items: 4. These all came like letters in proper envelopes. We had 2 from the local candidate, Alex Wilson, and 2 from the regional list candidate, Rodney Berman. All 4 mailings were a letter and leaflet, so 8 pieces of literature in total, all bilingual = a whopping 16 points.

Comms note: one of the leaflets is a CV of the candidate, which is quite a nice piece of literature. Given the lack of space I'm not sure why they needed to include his hobby of running a theatre group, though.

SMART goals: 3 - not much really that could be measureable. A lot of space on the regional list leaflets is used up explaining how to vote tactically and "lend your vote" to the Liberal Democrats.

Vague objectives: -7. Things like "better schools and hospitals" are laudable, but not specific.

Shade: There's a personal swipe at "our current MS", ie.e. Vaughan Gething, but they don't mention his name. In it's own way that's extra-insulting. Plus "The Conservatives simply don't have the answers for Wales' future" while Labour "is a wasted vote" and "Plaid are focusing on consitutional issues ahead of the COVID recovery." While asking Labour voters to lend a vote to them, they say that could have kept UKIP out of the Senedd last time. I'm going to count that as shade too, so the total shade points are -5.

Irrelevant photos: -1 for a stock photo.

Number of items: 4. 2 general ones and 2 for the local candidate, Nasir Adam. All bilingual, so 8 points.

SMART goals: 11. Lots of these including specific numbers. 1000 more doctors for the NHS. 5000 more nurses and other healthcare professionals. 50,000 new homes. And a promise of an Independence Referendum before 2026.

As a note, just because a goal is SMART doesn't actually make it smart. I have grave doubts an extra 1,000 doctors could be recruited in just 5 years.

Relevant photos: 10 - lots of photos on Nasir in action including on a community litter-pick wearing a t-shirt that riffs on the cover of Straight Outta Compton by NWA. An interesting photo choice. Judging by these leaflets, Plaid have one approved photo of party leader Adam Price, which must appear on all their literature. Just that one photo. No others.

Vague objectives: -10. Lots of aspirational stuff like "a fair deal for families". What does that even mean?

Shade: The thing about encouraging tactical voting is that you end up throwing shade on parties by just saying they can't win. That's said about the Greens and the Lib Dems. Generally though they don't really go after anyone. -2 points.

Typos: It's not a typo but on the leaflets from Nasir, he lists 4 pledges on one leaflet and 3 pledges on another leaflet and the pledges are different. So I'm going to ding a point for inconsistency. -1 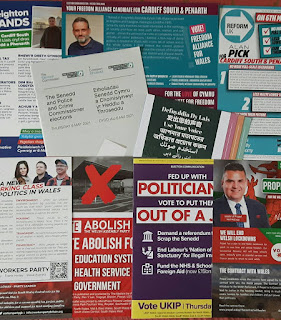 Vague objectives: -5, including "more police on our streets". How many more?

Shade: Just the one reference to Labour failing Wales before the pandemic. -1 point.

Irrelevant photos: -5. Stock photos of policemen, a hospital, a motorway.

SMART goals: 0, unless you count the name of the party

Vague objectives: Do we count hashtags? #SaveWales #SavetheUnion. They reckon a vote for them will bring about one education system, one health service and one government. No real detail on what that would look like. I'm going to give them -2 for the hashtags.

Shade: This leaflet doesn't say anything beyond slogans.

Irrelevant photos: 2 stock photos, one of the Senedd with a red cross through it and a landscape. -2 points

(This appears to be some kind of anti-Lockdown party. There are also are a few conspiracist-tinged phrases in their literature, like "the current political structure and its controllers".)

Number of items: 1 (saes yn unig, although it does say "For the love of Cymru vote for freedom")

SMART goals: I guess "no lockdowns, no curfews" could be measureable. A generous 2.

Vague objectives: This whole screed is a vague objective, starting with "a new way of doing politics is needed". Alan promises to return Wales to a position "where people matter more than our politicians". This will be through "honest conversations" and asking "difficult questions that need to be asked". To be honest by the time I got to the appeal to "common sense solutions", I had checked out. However, a quick run through brought me to a tally of 19 vague objectives. A new record.

Shade: All other policial parties and "career politicians". And their controllers too I guess. I'm going to just give -1 point as he is the only candidate to throw shade on the controllers.

Pandemic Points: doesn't actually mention the pandemic, despite claiming "Lockdowns have plunged the Uk into unimaginable debt, caused a national mental health crisis, devastated our children's education, and have been directly responsible for many avoidable deaths from cancer, heart disease and suicide." Still, 0 pandemic points.

SMART goals: There was no room for any on the leaflet.

Relevant photos: 1, of the man himself, David Rolfe.

Shade: David claims to be "An independent voice among the political chaos of mainstream parties" but he doesn't actually throw shade on anyone. 0 points.

Typos: there's a word missing in the legally required text on the leaflet. -1

SMART goals: "We will end Welsh lockdowns". OK. Well I guess that's measurable. It also mentions that Propel candidates have signed a "Contract with Wales" to introduce 10 Acts in the Welsh Parliament. The leaflet invites me to look them up online, but I'm not really that invested. So there may be details there that would turn them into SMART goals. I'm only giving 1 point though.

Relevant photos: 1, of leader Neil McEvoy. And his signature. Which potentially gives graphologists a deeper insight into Neil's personality.

(This used to be the Brexit Party)

SMART goals: The one measureable goal is to halve the number of councils in Wales from 22 to 11. They are also promising no more full scale lockdowns. 2 points.

Relevant photos: 2. There's a photo of the local consituency candidate Alan Pick, and one of party leader Nathan Gill (who was previously elected to the Senedd as a UKIP candidate and then quit that party).

Shade: They accuse Welsh Labour of keeping children out of schools without good reasons. Otherwise, they use a good chunk of the leaflet to claim that 50% of people don't vote in Welsh elections so seem to be trying to cultivate people who don't vote rather than steal voters off other parties. So that's just the 1 shade point for the Welsh Labour reference.

SMART goals: They want a referendum to scrap the Senedd. They also want to cut alcohol duty and scrap business rates for small companies. I'm going to give them 3 points.

Relevant photos: 6 of their list candidates and Neil Hamilton who is the party leader (and is beginning to look like the Emperor Palpatine), so 7 points in total.

Vague objectives: Lots of comments like "UKIP Stands against the knee-taking cultural vandals who want to erase Wales' history by removing statues to its fallen heroes." Talk about fighting imaginary enemies.

There's other stuff too like ending illegal immigration and funding the NHS instead of sending foreign aid, which has echoes of the lies told during the Leave campaign about all that money that could be spent on the NHS and which then disappeared. I counted 9 vague objectives.

Shade: Lots of it. The Tories and Reform UK "are desperate to keep their snouts in the trough", the Abolish the Assembly Party weren't nasty enough to displaced people in a migrant camp, Mark Drakeford "cosies up to Plaid Cymru who want to destroy the UK and drag Wales back into the EU." They mention the EU a few times. It's clearly a bogeyman for them. The only people they don't mention are the Liberal Democrats, which must be quite demoralising for them in a way. -5 points.

Relevant photos: 4. (3 photos of the people I think are the named candidates and 1 of George Galloway, party leader, who is also on the regional list.)

Vague objectives: 8, at least. But a lot of statements that aren't anything, like, for example: "There should be no homelessness in Wales... Affordable housing projects are not affordable for normal people." There's no actual commitment to do anything.

Shade: there's a swipe at "big business" but no mention of any other parties. 0.

And that, dear readers is it, for now. Well done if you have made it this far. Hopefully you will get your strength back in time to vote on Thursday.