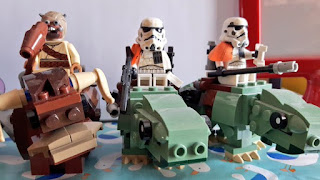 When Star Wars was first released (as Star Wars - the A New Hope title came later), it was a standalone movie. It's well known that George Lucas borrowed heavily from storytelling theory and other sucessful movies to craft a self-contained story about a hero plucked from obscurity to rescue a damsel in distress, aided by a magical mentor and two bumbling servants, to triumph against all the odds over the forces of evil.
In that sense, Star Wars is a perfect film. With ground-breaking special effects and enough fantastical aspects to the plot to keep things interesting, the movie was a massive success. That meant there was a hunger for more Star Wars stories and soon comic books, novels and a now-legendary Holiday Special filled the gaps until the first official sequel movie came out.
One problem this has caused is the development of a lot of extra material. Sometimes known as 'lore', the extra details found in the books and comics, like the make and model of the spaceship the heroes travel in, and new characters introduced add to the complexity. In addition to the three movies of the "Original Trilogy" were some cartoon series and two spin-off movies featuring the Ewoks who were the cutesy, gutsy additions to the Star Wars universe in Return of the Jedi. These extra creations are now available on Disney Plus.
Every so often new movies have come out and these have caused problems with various aspects of the 'lore' so that leads discussions about what events and people are 'canon' or not. When Disney bought the rights to Star Wars they ruled that the timeline that had been established after Return of the Jedi was now non-canon, and rebranded it as 'Legends'. They have subsequently relocated established characters, like Grand Admiral Thrawn, in the 'canon'  as characters in TV series.
Some of the books that I really enjoyed reading, like the X-Wing series by Michael A Stackpole, and the stories found in the comic books like Dark Empire, are now in the grey zone of Star Wars Legends, rather than being canon. I have mixed feelings about this. In one respect it doesn't matter. However, it does mean I don't take anything for granted. There are rumours that the most recent sequels are going to get rebooted soon.
But, I have started to grow ambivalent about Star Wars. It stems from working my way through the canon, particularly watching the Clone Wars cartoon series. There are lots of unanswered questions in that series, set 20 years or so before the events of A New Hope, revolving around the Jedi, their role in the Star Wars universe, and whether they are the righteous warriors I was led to believe.
One of the questions I have regarding the Clone Wars, is why are the Jedi automatically generals? Who decided they were equipped to lead? Generally speaking they are terrible at it. Huge numbers of clone troopers die in almost every episode. Too many decisions are made in defiance of orders, which in turn seem to be made for the sake of being made.
The Jedi are committed to saving the Galactic Republic. So that leads to a deeper question - was the Republic worth saving? Presumably it is meant to be a good thing, but it's a huge bureaucracy and the taxation levels must have been off the charts. The Separatist mistake was having an army of conquest. They would have been better off using their army to protect worlds that joined them and enforce trade routes and so on, because these seem to be the main issues in the Star Wars glaaxy.
Which leads to another question, why are all these planets dependent on outside trade anyway? Planet after planet is under threat during the Clone Wars from blockades. The people of the Republic are routinely shown to be running out of food and medical supplies, and dependent on the hero Jedis turning up and rescuing them. How can people live on these planets without having their own means of production? Presumably at some point each planet was reasonably self-sufficient.
Most of this could just be explained as bad storytelling. But it's the wider arc of the story that has the biggest problems. Specifically, are the Jedi good? Many of the defining features of the Jedi focus on their deliberate attempt to be detached and emotionless. That's a fairly common element in the Clone Wars cartoon series. They are supposed to be peacekeepers and protectors but almost gleefully accepted their roles as generals in the army of the Republic. We never see a big debate about this, or a schism between Jedis who don't see their role as warriors.
I'm not the only person who has started to question the character of the Jedi as presented in the Star Wars films. In this article, 'Hang the Jedi', Jay Allen points out something quite chilling about the introduction of the Jedi in Star Wars.

The first time we ever see the power of the "light side" of the Force is to psychically dominate a security guard. The first time we see a lightsaber in use, it's to maim someone in a bar brawl. It's the "elegant weapon" of a man so feared that his battle cry sends the local people scattering.
Small wonder, given that his apprentice slaughtered those same people indiscriminately and without repercussion.
This man, Obi-Wan Kenobi, pines for a time when he and his brothers roamed the galaxy, meting out their unaccountable rulings as emotionless judges and executioners— when not using their powers to cheat at dice.

That post goes on to point out that the Jedi don't do anything to challenge slavery because it would be 'interfering', or to challenge the domination of sentient machines by organic beings (which is one of the most interesting subplots in the recent film, Solo). There is a good discussion to be had about exactly why the galactic population appears to be illiterate and there is no functioning media. Whose interests does that serve? Why aren't the Jedi champions of education?
As an aside - there is a school scene in the recent series The Mandalorian and it would appear that schooling is something that has been reintroduced for children following the Galactic Civil War.
Another aspect of the original Star Wars film that deserves a second look is something that is written in a slightly tongue-in-cheek way in this article: The radicalization of Luke Skywalker. There are some good points made in there - particularly about Obi Wan Kenobi telling a version of the truth about his father that is later revealed to be a lie. Kenobi doesn't tell Luke everything he needs to know about the Force, and neither does Yoda, which later in Luke's life and the Star Wars Saga has disastrous consequences when Luke tries to train his nephew as a Jedi.
So, where does this leave me, as a long term fan of Star Wars? It was a story that brought me hope through wonder when I was a dislocated seven year old, a film that seemed to be imbued with deeper, more spiritual meaning, and ultimately being Star-Wars-without-the-Force was one of the many, many things I found defective about the film Rogue One.
Maybe I've gotten older and more sceptical. I'm not taking as much on faith these days. It seems sensible to question the motivations of those who claim some kind of leadership role, which they might not be suited for, and who claim some kind of deeper knowledge, that comes with its own dark side of deception and desire for power.
Or maybe I haven't grown up, and I can write a lengthy blog post analysing areas of doubt in something as if it were real and important, because to me it is real and important; it's a certain point of view.
Posted by Jongudmund at 08:24