So this is my review of Rogue One, the most hyped movie of the Christmas season, eagerly anticipated, and, it seems, raved about by fanboys far and wide across the internet and twitterverse.

But it left me cold. In fact, talking about it this morning for a radio interview, I realised that the way I felt about it is probably how a lot of people feel about Star Wars when they watch it having been always told they should watch it, and then are left wondering what all the fuss was about. 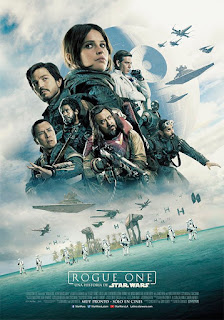 The basic premise of the film is that Jyn Erso, a rebellious young woman who is not actually part of the Rebellion at the start of the film, may be the key person in getting hold of the Death Star plans. Her father is the guy who designed the battle station. But he's had a twinge of conscience. He has sabotaged the design with a 'flaw' that can be exploited. That flaw is the exhaust port in the Death Star trench that for years has been mocked as a ludicrous design fail. Now it turns out that it was meant to be there all along, hidden in plain sight.

So this entire film seems to exist to gainsay people who take the mickey out of the simplicity with which the Death Star can be destroyed. Haha! Mockers! It was all part of the plan! (Although, it has been pointed out by others that this means the destruction of the Death Star was an inside job. Conspiracy wingnuts rejoice!)

There is probably mileage in making a film to explain every plot hole and scripting fail in Star Wars. Expect a feature film about the mysterious cave on Dagobah, or why Leia had memories of her mother who died minutes after giving birth to her, or why Lando appears to be wearing Han Solo's clothes at the end of Empire Strikes Back. And people will go to see it in droves, because, Star Wars.

Some smart people have dissected the trailer and noted there are at least 12 key scenes that don't appear anywhere in the finished film.


We know it was a troubled production with numerous reshoots and script rewrites. That really shows. Taken objectively, if this wasn't a Star Wars film people would be asking serious questions of it. Saw Gerrera is a key character that just doesn't need to be in it at all during the first half of the film. Seriously, if you cut him out and just had Jyn and Cassian Andor going to Jedha to find a pilot who has defected it would make no difference to the story.

I found myself watching this and hearing the voice of the guy who does the voice-over for Cinema Sins on YouTube. There is so much wrong with this. The pilot is exposed to a questioning technique that will send him mad, but is brought back to lucidity by Cassian telling him that he's the pilot who defected. The Death Star's weapon is tested on a city with a large Imperial Garrison, killing more of its own soldiers than the local terrorists could ever have hoped for. Jyn Erso, newly recruited and of questionable loyalty, is allowed to hold court in the main Rebel Alliance briefing chamber in front of all the representatives of the systems who are trying to work together against the Empire. Cassian is given top secret instructions and later the briefing officer repeats them out loud to the entire room full of technicians and communications people, for nobody's benefit but the absent-minded audience. The film ends with the Empire using the Death Star on its own central archive. Not even the Empire would do something that self-destructive. They could have just turned the Death Star on the Rebel frigates, like they did over Endor, and finished the engagement very quickly.

It's bollocks like this that just had me shaking my head and internally narrating Cinema Sins style.

There has been a lot of talk about the ending. The film ends on a bit of a downer. It's a doomed mission and the characters you have just got to know head into overwhelming odds. But there is also a slight twist in that the action shifts to frantic scenes aboard a Rebel spaceship as they try to get the Death Star plans away. This is the bit that people are going on about, not the deaths of the characters whose stories have actually been told in the film. Which kind of indicates the lack of depth to the storytelling - we don't care about these people or their sacrifice. And we should.

So, all in all, this film was a mess. A different sort of mess to the other prequels, but a mess nonetheless. It has some high points. Seeing Darth Vader's summer retreat was kind of fun. And it looks like it runs on geothermal energy so some environmentally sound kudos to the Dark Lord of the Sith for that. I wasn't that fussed on the CGI version of Peter Cushing as it looked a bit video game to me but it was a brave decision to go that route. And Tarkin is a key character in the Rebels cartoon series so it made sense to have him in this film. The unexpected ending when it switches away from the doomed heroes we all couldn't care less about was a genuine surprise and I quite liked the idea behind it. But still, there was something lacking.

I think I know what it was. The Force was conspicuously absent from this movie. Literally. It is barely mentioned. There are no Jedi. And although we see Vader using the Force in his Dark Side ways, he doesn't talk about it or even use the term. There is a pseudo Jedi, Chirrut Imwe, who repeats a mantra of being one with the Force, and who says he meditates on it, but he is not a Force user.

The absence of the Force removes the sense of cosmic battle between good and evil. This is a film about grey areas. The rebel soldiers have done terrible things as well. The Alliance is fragmentary with groups of hardliners willing to commit atrocities in the name of Rebellion. In that sense, this reflects the geopolitics of the 21st century rather than the late 1970s, or certainly the popular understanding of geopolitics. We've all grown up a bit and it's no longer good guys v bad guys.

It perhaps also reflects a change in the way we do 'spiritual'. Chirrut Imwe is not an official, trained Jedi. He has his own understanding of the Force, reflecting perhaps, pick and mix self-trained spirituality. He is helped in his mysticism by being backed up by a guy with a very, very big gun. Maybe there is a deeper level of meaning in that.

On a personal level, my feelings towards this film have been overshadowed slightly by the sad news of the death of Carrie Fisher. While she was ill in hospital many people tweeted or posted pleas for the Force to be with her and to protect her. I imagine most of those will have been out of sad respect rather than genuine belief. I've said before that Return of the Jedi was the first film I saw when my family returned to this country from Africa and I think that is why it had such a profound effect on me. With Rogue One the effect has worn off and that makes me feel a bit sad.
Posted by Jongudmund at 13:01