This month's snack of the month is a contender for least exciting name for a snack, ever. Yes, it's "Salty Sticks filled with Peanuts". 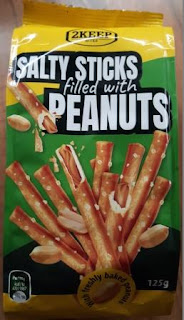 This was another random snack discovered in Home Bargains. They are basically a pretzel-type stick with a smidgeon of peanut butter inserted in them. They look like this when served. 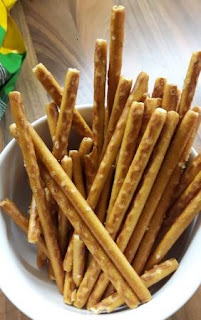 The filling is minimal. 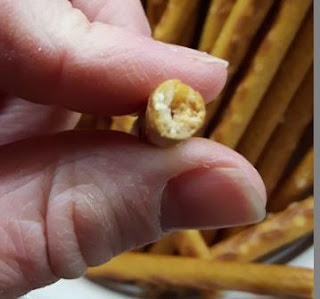 Despite being very thinly spread, the filling gives the pretzel sticks a nice peanutty taste. However, they're not very exciting, and unlike Ding Dong or Bamba Puffs, I probably wouldn't bother buying them again.
Speaking of Ding Dong, Cathy went for a foray into town and came home with an array of Ding Dong that has kept me going while watching late night baseball games recently.
In addition to a regular 'Mixed Nuts' bag, there were Hot & Spicy flavour, Garlic flavour, and a 'Snack Mix' that contained crispy little curls and other crunchy bits. That latter one was a very nice snack. The Hot & Spicy was less hot or spicy than I expected and didn't taste much different to regular Ding Dong, and I haven't tried the garlic one yet.
We have recently had a relaxation in lockdown rules, and that's meant we have been able to visit a few friends and sit outside with them. When we visited Matt and Lauren in their new home (well, on their new patio), Matt was keen to show me their Snack Crates, which are mystery boxes of snacks from different countries that arrive in a very nicely packaged box that even includes a link to a curated Spotify playlist from that country.
They had a box from Brazil and Sweden on the go. Here's the Brazil box, with Matt doing his best 'showcase the snack crate' smile. 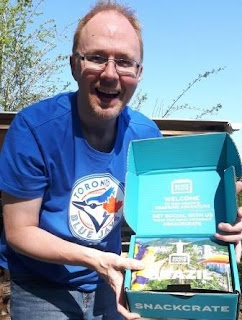 The contents of the Swedish snack crate seemed to have been picked to amuse puerile anglophone snackers. 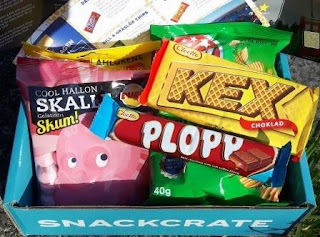 I'm sure everyone would like to eat some skum, munch on some kex, and chow down on plopp. And the people who selected the snacks for that crate weren't sniggering as they put it together.
One of the snacks in the Brazil crate was another peanut-based snack. There were two in the crate, so Matt and Lauren said I was welcome to take one for blog review purposes! 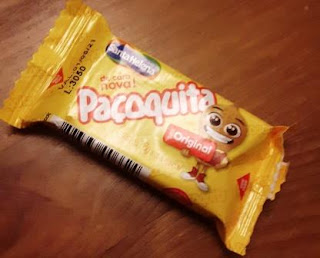 Pacoquita is like a crumbly block of peanut butter with a bit of sugar mixed in. It crumbles like a butter tablet or very dry fudge. It was very nice, but I wouldn't be able to eat a lot of it because it was very rich.
That's it for now. Stay tuned for another snack of the month next month.