In my previous post I deconstructed a Facebook comment that was trying to use moral equivalency to downplay the actions of the Government advisor Dominic Cummings by claiming that people from all political backgrounds were breaking the rules. I pointed out several problems with the argument, including that it disregarded several inconvenient facts as it tried to build up justifications.

'Moral equivalency' and its close ally, 'whataboutery', are becoming very common tools on the right wing of politics. Usually Whataboutery starts literally with the words "What about..." followed by a completely unconnected issue. But it doesn't always have to be this way. Sometimes the whataboutery is implied. Here's an example that was shared by someone I'm Facebook friends with. 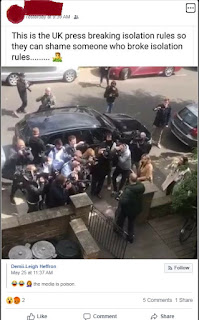 That's a shared post that had the original caption "the media is poison". The text above the photo is part of the image and says "This is the UK press breaking isolation rules so that can shame someone who broke isolation rules............[facepalm emoji]"

The implication there is that the media are hypocrites and therefore morally equivalent to the person they are trying to talk to. The aim of sharing that post is simple - to downplay the wrongdoing of the person who is being targeted by the media by pointing out that other people are now behaving just as badly.

Again we can deconstruct this. I have some points. For the purposes of this argument, I am going to assume this is a genuine photo and not something that has been repurposed. You do have to be careful with right wing memes because the photos often aren't what they claim to be. But let's take it at face value.

1) The journalists aren't following social distancing guidelines. They should be punished. Nobody needs to defend them.
2) The journalists would not be there at all if Dominic Cummings had followed the rules that he had been party to developing.
3) No "isolation rules" are being broken there. Social distancing rules are being broken in that picture, yes (see point 1) and, more importantly, Dominic Cummings broke quarantine rules. Those rules are to stop people who are ill with Coronavirus from travelling and potentially infecting other people. Breaking quarantine rules is more likely to infect other people with Coronavirus. That's arguably more serious than breaking social distancing rules.
4) The whatabouterist is trying to change the focus to the response. This is a common tactic, to change the discussion from the actions of the person in the spotlight, to try and talk about the reactions they have caused.
5) There is a faulty claim to a double standard here -  the criticism of the people in the picture is that they aren't following the rules. But the real double standard is holding the members of the media to a higher standard then the person they are investigating.

The description of the event as a shaming attempt isn't accidental either. This isn't about trying to "shame" a person. This is about the media challenging a person who has a lot of influence and power about their behaviour which has directly placed other people at risk of harm. Describing at as 'shaming' is an attempt to downplay it.

Here's another example of whataboutery, this time a quote from a newspaper columnist done up as a meme by an ultra-conservative (ie hard right) group called Reasoned UK and shared by a different Facebook friend. 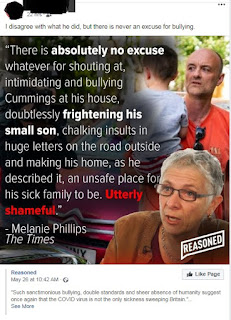 My friend added her own commentary, saying: "I disagree with what he did, but there is never an excuse for bullying."

The quote is from Melanie Phillips who writes for the Times. For context, she's written some pretty racist columns about migrants in the past and is a climate change skeptic. She has also, and this is important, lost at least one journalism job after writing stuff that wasn't true. So, the first question we have to ask, is, is this true? Did Dominic Cummings experience intimidation and "bullying" from his neighbours?

But, let's say he did. Let's give Melanie Phillips the benefit of the doubt here. What is the argument? Apparently "[t]here is absolutely no excuse whatever for shouting at, intimidating and bullying". None, whatsoever!

Now Melanie might have said that, but her article is behind a paywall. And the people who dressed her words up in this easily shareable quote have left any caveats that she might have included out.

We can debate the old idea that two wrongs don't make a right, and I would generally agree, but when people try and shift the focus to 'what about the reaction!?!?" they are doing it for a reason, and that reason is to gloss over the bad behaviour that has brought about that reaction. It's ultimately a form of victim-blaming

Whataboutery can take some pretty wild turns, as it turns out. I've got one more example, which I will save to my next post.
Posted by Jongudmund at 21:16