The fractional losses, being human in a viral world

A while back, my friend Sara and I talked about 'microaggressions' in our industry. These are tiny ways that processes and interactions rob you of your humanity. Usually microaggressions occur in discussions about racism or other forms of bigotry, but I feel the definition could be widened slightly.

It seems almost pointless to add to the many handwringing opinion pieces about the awfulness of the Covid-19 pandemic. There have been some real tragedies that have upset me incredibly. Well over 100 NHS staff have died of Coronavirus, including five people from my organisation. I felt very sad about the identical twin nurses from Southampton who died within days of each other. These are the big, headline stories that overwhelm me and make me feel guilty about my losses, which are slight in comparison.

But they are still losses. Yes, a death of a very close loved one is incomparable. But that does not negate the build up of those fractional losses; those small ways in which we have been denied the things we need. The virus is aggressive, but it also deals in microaggressions.

In no particular order, I've lost the following since the beginning of March.

1) Funerals. On the 19th March, a year to the day that my Dad died unexpectedly, my friend Ben died. He was the same school year as my brother, Dave, and Dave's best friend. Ben and I shared Best Man duties at Dave's wedding. 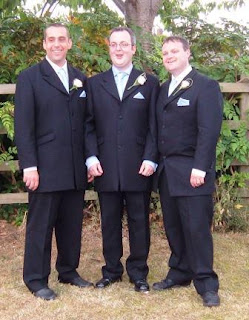 Ben was only 40 when he died. He had a crazily rare condition, which felt cruelly random. It feels strange to think he has gone. We had that kind of semi-distant friendship where you don't see each other for ages and then when you do, it feels like the gang has got back together. I saw him last year. I didn't know that would be the last time.

A few weeks later my Uncle Malcolm died. I've been visiting him several times a year for several years now. If I had a work appointment in North Wales I would try and call in and see him.

I would have wanted to be at the funerals for both Ben and Uncle Malcolm. Social distancing requirements and restrictions on travel prevented that. It's hard to not get that opportunity to pay respects, share some stories, hug people who also loved the person who has passed on. 'Closure' is an odd word, but that is what a funeral gives you. And I don't have it.

2) Involvement. My Mum has moved house. We had plans for this - it was going to be the weekend after my birthday. I would be there helping to shift stuff. I would be there as she moved into her new house and help her settle in.

All those plans got turned on their heads by the pandemic. She was able to move but there have been unexpected hurdles and issues. My brother has had to manage it all and I feel frustrated by that, knowing that the burden we would have shared has been dumped on him. He hasn't complained at all, but I wish I had been there to help him.

Another aspect of being stuck over 100 miles away from the action is my own personal goodbye to the family home that has been the welcoming safe haven for 35 years. I stayed there for a weekend at the beginning of March. I was expecting to be back there at least one more time before it became someone else's house. It feels like that chapter of my life has been forcefully closed for me before I had finished reading the final page.

3) Football. I know football isn't important really. But I had plans. I was trying to work out how to get to Sunderland for Shrewsbury's away game there on 4 April. At Easter I was going to go and watch Barry play in Caernarfon on the Saturday and then see Shrewsbury's home game against Ipswich on Easter Monday. In June I had tickets for Euro 2020, including a game at Hampden, which is a ground I'd really like to visit. My last game this season was my 35th. My record for a season was 37 and I was going to bust through that and probably over the 40 game mark.

They're all lost opportunities rather than actual losses but sometimes we grieve over what we can't have, rather than what we had.

4) Routines. Since September I've been learning Welsh two evenings a week. I had got into a routine with it. Leave work, park at the uni, catch up on my homework while eating a sandwich, go into class. I had a good bunch of classmates, all genuinely nice people.

We have switched to Zoom. We lost half the class when we switched. I have found the move online more difficult than I thought it would be. The dynamic of learning has changed. Our tutors have done their best to make it work, but it's not easy using resources designed for the classroom when you don't have a classroom. If I have Zoom calls all day and then a 3 hour class on Zoom in the evening I feel exhausted.

5) Moments. My Mum said to me that her main regret in all this is that she feels she is losing the time she has left. I know what she means about that because lockdown life is not life at its fullest.

I miss being able to mooch around the charity shops with Cathy on a Sunday afternoon.

I miss meeting my friend Sara for work chats over coffee.

I miss my bunker at work. Our office has been occupied in our absence by a team who had their own space requisitioned with very little warning as the hospital reconfigured and braced for crisis. I have regular WhatsApp coffee times with my small team, but it's not the same as seeing them every day and having them on hand to bounce ideas with or get a third opinion on something.

I miss making the effort to go out on a Monday evening to my book group, and being glad I did afterwards.

I miss calling in at a supermarket and just being able to walk in without any hassle.

I miss going out to eat. I don't mean fancy meals that cost a lot. I mean evenings when I felt too tired to cook and we went and hid from the world and responsibilities in a booth at Pizza Hut, eating pizza with a base that has gone crispy with grease and pretending that the bowls we filled with 'salad' were healthy.

I miss those moments of connection. In the queue at the post office. With the cashier in the supermarket. Those friendly chats with strangers. Now we just nod from distance.

They are all instants, but those many moments add up. Being robbed of so many small elements of humanness makes all this harder to navigate. Sometimes I worry that the fractional losses are making me lose sight of myself, that I will be lessened by all of this.