Something that frustrates me most in the political conversations I see around at the moment is "whataboutery" and "moral equivalency".

I'm going to use some examples that I've seen on Facebook in the last couple of days that were responses to the recent row over the actions of the Prime Minister's advisor Dominic Cummings to illustrate these debating tactics. In fact, they aren't debating tactics. They are attempts to shut down the debate or derail it into the long grass.

I tend to see these more when people are trying to defend the Tories or actions of those even further on the right. They have been very common on the anti-EU side of the Brexit argument, and they are almost universally used by apologists for Donald Trump.

That's not to say they couldn't be used by anyone, from any political ideology, supporting any political aim. Or really any argument at all. You see these arguments all the time in sports when shady, loaded individuals want to take over a football club for example, and fans are looking for a reason to justify their continued support for a club that is now owned by a human rights violater with a reputation for torture.

But I tend to see them deployed most often on the political right. They are used to minimise terrible moral actions and deflect away scandals. They have been very effective in the propaganda wars on social media. They tend to get shared by people who aren't very good at recognising propaganda.

There is a subtle difference between the two."Moral equivalency" is the fancy term for saying "they're all as bad as each other!" Moral Equivalency gets rolled out any time a person's degenerate behaviour is questioned. Here's an example; the first comment left on a post that my friend Sian shared on Facebook about Dominic Cummings. 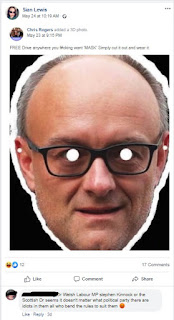 The joke that Sian shared is that if you 'cut out' the mask and wear it you can drive wherever the f*ck you want during lockdown. This joke incidentally, was ripped off by the Daily Star, and printed on their front page.

The very first comment is a classic piece of Moral Equivalency.

"Or Welsh Labour MP Stephen Kinnock, or the Scottish Dr. Seems it doesn't matter what political party there are idiots in them all who bend the rules to suit them [angry emoji]"

Do you see the attempt to make an equivalency case? Well, says our erstwhile commentator, they're all as bad as each other.

There are so many problems with this approach it's hard to list them all, but we can deconstruct this argument to see what the person using it is trying to do.

1) It casts shade on somebody else from a different part of the political spectrum to try and provoke a defence of that person. (It's a shame for them they can't do better than Stephen Kinnock. I can't imagine anyone jumping to his defence.)

2) If they don't provoke a defence of that person, it is still minimising this as just a political disagreement. They're basically saying 'You are only disapproving because he's an advisor to the Tory Prime Minister.' That's basically invalidating a person's opinion by accusing them of bias. It's an attempt to negate the argument by changing the basis of the argument from examination of a person's actions to debate about their beliefs.

3) It's an attempt to downplay and justify. But justifying bad behaviour by citing another person's bad behaviour is juvenile. That's like me telling my Mum I shouldn't be told off for kicking the cat because my brother forgot to feed the cat last week*.

*this is an analogy. No cats were actually kicked or neglected in the writing of this blog post.

4) This is a good example of someone trying to "kitchen sink" an argument - throwing in all the examples they can to show that there are loads of people breaking the rules out there.

In this case the person doing the 'kitchen sinking' is factually wrong which is counter-productive to their argument. The "Scottish Dr" was an employee of the Scottish Government, not a member of a political party. (As far as I'm aware, anyway. I never saw any party affiliations mentioned when the news cycle was about her.) And, more importantly, she resigned when her rule-breaking was discovered.

That actually shows a level of contrition and acknowledgment of wrongdoing that has been completely absent from Cummings. In fact, the "Scottish Dr" is an example of a high ranking government advisor who owned her rule-breaking and took the consequences rather than trying to avoid them. The commenter either doesn't know this or doesn't care. They just want as much evidence as possible. Facts don't matter. Kitchen sinkers are rarely deep thinkers.

5) It makes all wrongdoing equally bad. It's similar to when the tape came out with President Trump describing his approach to women as "grab them by the pussy" and his supporters replied with whatever bad thing they thought his opponents had done. 'They're all as bad as each other' implies that every action or attitude is of equal standing.

6) It reduces accountability. "Of course Dominic Cummings ignored the lockdown rules and quarantine restrictions - he's a political advisor, that's what people in politics do..." Such an attitude basically gives people a free pass and doesn't hold them accountable for their actions.

I have some more examples but this has turned into a long post, so I will write about them in part 2.