Two years ago we rescued some old family photos from my parents’ garage and scanned them. There was a lot of family history in the albums and I ended up discussing my great-great-uncle with my Dad.

When my Dad was little he lived with his Grandma, who he called Ninna, in New Broughton just outside Wrexham. Ninna’s brother, Robert, had left the Wrexham area early in the twentieth century to seek his fortune in America. When my Dad visited New York and went to Ellis Island he found his great-uncle’s name in the vast arrivals logs that the US Immigration Service has open there.

Robert Ivor Bostock was born in 1877. He was adopted by the Roberts family of Brymbo, my great-grandmother’s family, but kept the Bostock surname. I’m glad he did because there is a website dedicated to tracing Bostocks and it has a lot of information about him, and his family, on it.

For example, thanks to that website I know that in the 1901 census he was registered as a clerk in a brickworks in Brymbo. The next census he appeared in was an American one, in 1910, by which point he was living in Long Beach, California.

What happened in those 9 years? Well in 1905 he went to America on a ship called the Oceanic. Having gone through immigration at Ellis Island, he then travelled inland to Mahoney City, Pennsylvania. I know this because he had a photo taken there, which he sent back to his sister, Elizabeth (Ninna). Sadly the photo mount got cut to make it fit into a photo frame at some point, so his message on the front has been lost, but the information on the back is intact. 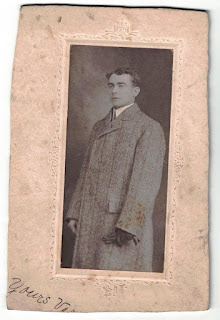 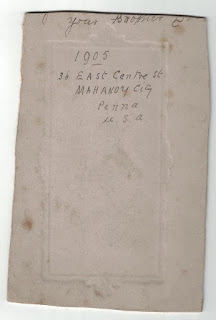 From Mahoney City he made his way to Los Angeles. A couple of years later, in 1908, he got married. His new wife was also called Elizabeth. She was originally from Skipton in Yorkshire and was another immigrant to California. We have a wedding photo. 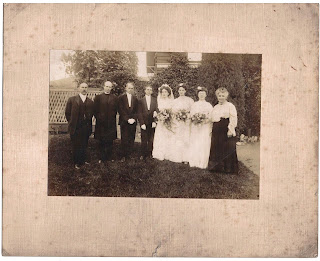 I think Elizabeth must have emigrated with her family as she seems to have her mum present. Robert went the America alone, although he did already have a cousin who was also called Robert living in the USA. I don’t know if his best man is his cousin or a friend he made in California.

Within a year, Robert and Elizabeth’s first son, Albert Ivor was born. Albert lived until 1995. We have a baby photo sent back to Ninna. Photos like this would have been the only sights she had of her nephew. 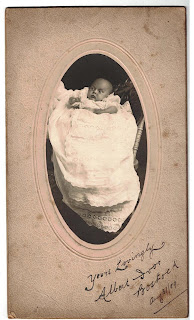 In 1911, Robert and Elilzabeth had a daughter called Gwendolyn. I think this photo is of Albert and Gwendolyn as small children, mainly because we have no other photos of children dressed like this in the archive. 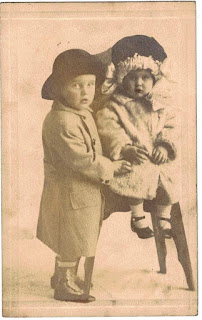 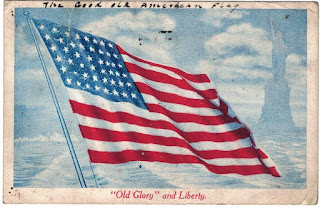 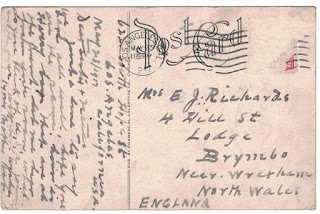 The message on the back is a bit difficult to read. I think it says:

“Dear sister and niece [possibly my grandma, Eliza Jane Richards]
Just a line to say we are all well, hope you are the same. How is [???] boys that are at the front
did you hear from [???] soon
What do you think of the U.S.A. joining in the war
with best wishes
Your brother Bob”

It gives his address as 622 South Hope Street, Los Angeles, California, USA. This is now right in the centre of downtown LA, only a couple of blocks away from the Omni Hotel where Cathy and I stayed on our first ever American roadtrip in 2004.

Robert had applied for American citizenship in 1912, at which point he was an agent of the Metropolitan Life Assurance Co., now commonly known as Met Life. In September 1918 he registered for the army, at the age of 41. A large number of men he would have known from his days in Wrexham would have been fighting in the First World War, and maybe the pull of loyalty to his original homeland persuaded him to sign up once his new homeland entered the war. However, I doubt he would have left the USA as the war was over a couple of months later.

The only other photo we have in the archive is this photo of Gwendolyn, or Gwennie as she is called on the note. It’s dated 1927, so she would have been 16 in this photo. She lived all her life in Los Angeles and died in 1992. 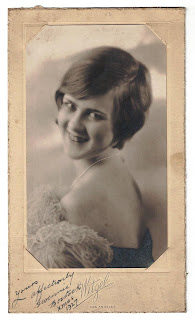 Over the last couple of years I’ve been thinking a lot about Robert and his journey to America. We forget sometimes what emigration meant in the era before air travel. He left home, travelled abroad, and never saw any of his family again. There was probably an exchange of photographs and occasional letters. His sister only ever knew her nephew and niece through those pictures that arrived in the mail. None of his family from Wrexham was present at his wedding or his funeral, and none of them ever visited his grave.

I feel this small blog post is a belated tribute to someone who went out and changed their own future, swapping Denbighshire for California.