It would have been my Uncle Malcolm's 70th birthday today and so I am posting a brief memorium piece. Malcolm died on the 1st April this year in hospital. In 2014 he suffered a damaging stroke which meant he had been in nursing care for the past six years.

His health had declined more in the past few months, and unfortunately his hospitalisation coincided with the coronavirus pandemic meaning no one was allowed in to visit him for the final days of his life. It also meant that we couldn't attend the funeral service. My cousins asked if I would send a few words for the graveside eulogy, which I did. I thought it would be nice to record them here as well. I've added a couple of other notes as well.


When my Mum and Dad organised various birthdays and other celebrations at our house, Uncle Malcolm would usually be found pouring drinks for people or doing the washing up. He liked to be useful and out of the limelight. (Here's a picture of him at my Mum's kitchen sink, armed and ready for battle!) 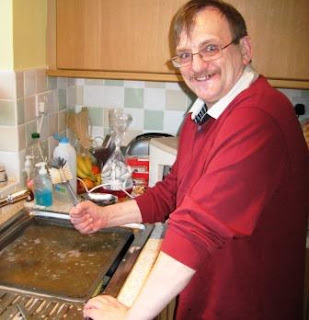 He used to drive my grandparents over to Shrewsbury at Christmastime. At some point in the evening, Malcolm would suddenly notice my Grandad was standing by the door in his coat. Malcolm would laugh and say ‘Oh, Dad’s ready to go. Guess I’ll be seeing you then.’ And with a cheerful smile, that would be the end of whatever conversation we were having. (It was usually about cars or sports, and often motorsports.)

Malcolm moved in with my Grandparents about 20 years ago. As time progressed he took more of a carer role for my Grandma, especially after Grandad died, and was the teamaker when we used to visit. He enjoyed baking and his scones were some of the best home made scones around. He also used to love taking photos, and showing you recent ones he had printed. Again, those were 'background roles' - getting the tea, taking the photos. The important things while everyone else chatters away. The man who facilitates the moments, and captures them on film. 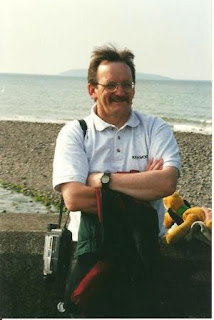 His stroke was an awful shock to the family. My Grandma found him and called the ambulance. In those early days we did not know quite how severe it was. As it turned out the stroke robbed him of almost all movement and practically all his speech. He could give a thumbs up, and say 'Yeah' and 'Weeeellll', but that was it. And yet he still managed to communicate even though he only had two words he could use.

It may sound strange, but I feel that visiting Malcolm in the care home was when I first got to spend time with just him. There were no dishes to be done or other people to chauffeur. I bought him some little Lego kits and we would build them together. 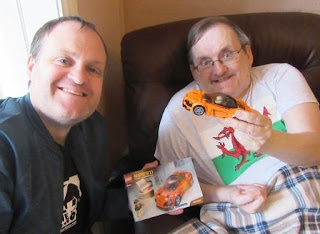 I was fortunate that I got a job that included regular trips to North Wales. I could call in and say hello when I was driving past Wrexham. I don't think he necessarily saw me at my best, tired after a long day of driving and meetings, but he always seemed sad when I apologetically said it was time to leave. Obviously I had to do all the talking while I was there, and I talked to him about work, and football, my MSc course, and all the other things going on in life.

I could talk about how my dad was driving me crazy. He understood, because he knew my dad well and knew just how crazy he could drive the people who loved him. Then one day I had to go and tell him that my dad had passed away, and he just held my hand as I cried. He couldn’t say anything, but he didn’t have to. It was all he could do; it was a kindness I will never forget.