It’s always Splott to me

Well, Torchwood is definitely the Welsh drama to end all Welsh dramas – mainly because after seeing it most people won’t ever watch any more. But seriously, after a disappointing, derivative first two episodes, where the best aspect of the show was the aerial shots of Cardiff, episode 3 wasn’t bad at all.

I’ve yet to hear a genuine Kairdiff accent though, which is odd considering how many scenes are filmed in Canton, Grangetown or the Docks. We did however get a genuine Kairdiff joke in episode 3. After tracking down a suspect to Splott, the token Londoner on the team asks “Splott??” incredulously. So far, so true to life – no one really believes there’s a part of the city called Splott, until you go there.

Cue: Welsh guy who doesn’t seem to do anything in the Torchwood team yet: “I think the estate agents pronounce it Splow…”
(Jongudmund’s note for the benefit of readers: ‘Splow’ rhymes with ‘slow’.)

This, of course, prompted much hilarity in our house, as some idiots do indeed try and call it Splow and maintain a straight face. Everyone else thinks calling it Splow is even funnier than Splott, as it tries to gentrify one of the slummiest areas of the city. There are some nice bits, and some very nice people living in Splott, but for the main, it is the nearest thing Cardiff gets to slums now Tiger Bay has been demolished.

A Splott on the landscape
After years living in Cardiff, I’ve kind of become immune to how funny ‘Splott’ sounds as a place name. But Splott (or Splow) is a weird one. Etymologically, one theory is that "Splott" is a truncation of "God's Plot", as the land belonged to the Bishop of Llandaff in medieval times. Or it could be a derivation of "Plat" meaning a ‘grassy area’ of land. While the God’s Plot theory is nice, in the 1400s there are records of two farms: Upper Splott and Lower Splott, which would relate more to the idea of grassy fields in the middle of what was then mainly marshy fenland.

But now Splott is one of the most populous areas of the city. Odd name or not, people take a certain pride in living in Splott, as can be seen by the unintentionally humorous graffiti pictured below… 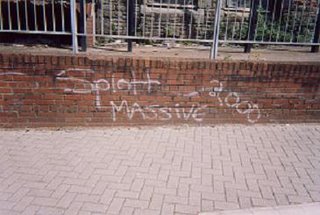