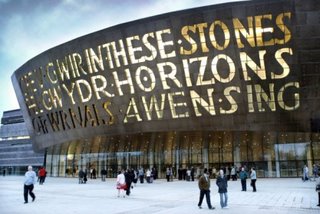 Last night I lost my opera virginity after “the Russes” bought us tickets to see the Welsh National Opera’s La Boheme at the Wales Millennium Centre (known to everyone who lives near to it as The Armadillo because it looks likes… well, a giant armadillo).

We arrived late and had to leg it up four flights of stairs to get in on time. I had a bit of a shock to find my boss sat on the end of our row. Elaine pointed out that he shouldn’t be sitting in the ‘cheap seats’ with the likes of us. The seats were very cheap – just a fiver, which made a night at the opera a much more affordable risk. At least this way if we hated it we could leave at the end of the first act. The good thing about sitting near the back is that we could get to the bar/toilets first in the interval. Score!

Another major plus were the subtitles in English (and Welsh!). Without them I would have been totally lost. The story is a romantic tragedy (hey! this is an opera) about a poet, Rudolfo, who falls in love with a sickly neighbour, Mimi, then tries to break up with her because he thinks that shacking up in his dilapidated flat is worsening her health. But it’s too late and she dies anyway.

In the car on the way home I pointed out that the whole thing should have been sponsored by British Gas as the main reason Mimi dies is because of a lack of heat. You could imagine an advert where someone explains the plot and someone chimes in smartly to say ‘they should have got British Gas’s super-duper home cover. It costs less than you think.’ The only problem is that the ad would only appeal to the 1% of the population who go to opera, but I suppose they might get the servants to investigate it further…

As to the performance itself – I’m not an expert on opera, but it seemed pretty good to me, especially with four reasonably long breaks in which to chat, which made it much more social than a night out at the cinema. It was a bit tricky to follow when the subtitles got out of sync with the songs a one point. The music seemed good (but I hadn’t heard it before so had nothing to compare it to), and the sets were superb. I tried to make a joke when the conductor came on stage for a bow at the end, saying “I don’t remember that character. Is he the vampire?” Sadly, Elaine thought I was being a bit of a dunce and started to explain that he was the conductor. Ho hum.

The message of the opera is that love overcomes, but obviously these ‘Bohemians’ with their free love and their poetry have to suffer the effects of their freedom (we can’t endorse immorality after all!). And so the poetry = poverty = death storyline acts as a warning against the bohemian lifestyle, with Mimi a victim not of love, which is virtuous, but of the selfishness of hedonism. Ho hum again. But I did like one stand out quote, when Mimi explains that “I don’t go to church much, but I pray to God a lot.”

The other stand out quote of the night was Elaine explaining that “You can move faster in high heels when you’ve had a drink…” Hmmm.
Posted by Jongudmund at 08:55