November seemed to zoom by. It was another busy month, with Cathy's birthday halfway through being the focus for several notable markers. We had our first house guest for over 2 years, as my Mum came down for Cathy's birthday weekend. We also went over to see Cathy's family in Gloucester and met up with her sister Abby for the first time since summer 2020.

A couple of days after Cathy's birthday it was our going-out-aversary - the 27th anniversary of our first proper date. (We went to the cinema and saw a long-forgotten film called Airheads.)

Mum's visit to Cardiff meant she was able to join me at a Barry Town game. As the weather is getting colder, I was delighted that she had knitted me a bobble hat in Barry's blue and yellow. 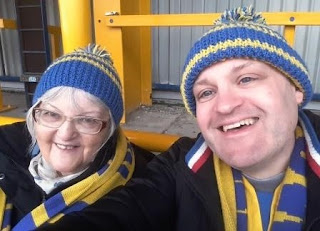 Mum proved to be a lucky mascot, as Barry edged a win in a dreadful exhibition of football. When I told my fellow fans that Mum had never seen Barry lose, they offered to buy her a season ticket.

I made it to some new football grounds, including Yate Town, where the snack bar had the most incredible range of condiments. 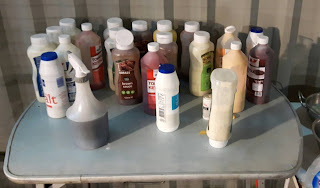 The atomiser is full of vinegar, which is a brilliant idea. Although I horrified my friend Steve by putting vinegar on my chips as he hates vinegar. (That meant I had all the chips to myself though bwahahaha.)

Another new ground was up the valleys at Penrhiwceiber. This was the suggestion of a fellow Barry fan called Paul, as Barry didn't have a game that day. Penrhiwceiber is a small village on the edge of Mountain Ash. Like a lot of valleys grounds, the scenery is spectacular and overshadows the football. 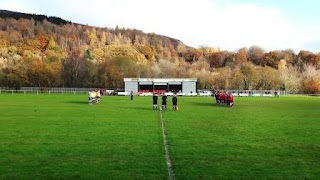 As it was a few days after the 11th, there was a minute's silence of remembrance. Near the end of the month, there was also a minute's silence before the game between Barry and Cardiff Metropolitan in memory of the former Wales player and manager, Gary Speed. It was the tenth anniversary of Gary Speed's passing, which seems a long time for something that still feels like it happened quite recently.

On another note, one of Cathy's birthday presents was a mushroom-growing kit. We had this in the kitchen for a couple of weeks. 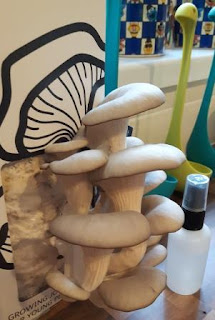 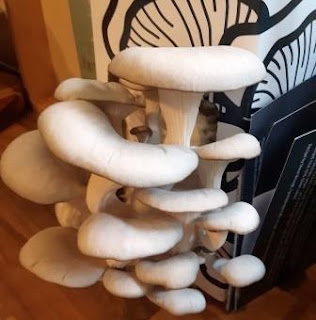 The 'shrooms grew visibly every day. It was fascinating watching them grow. Then we harvested them and ate them in a risotto. 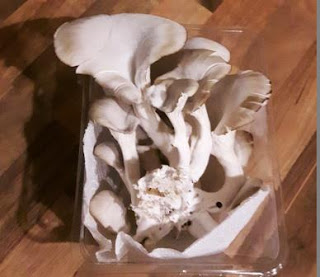 Entering December, we are looking forward to Christmas. Except the news that a new variant of the Sras-Cov2 virus has been discovered means nobody knows what will happen in the next month or so. The variant has been named Omicron.

This is a few weeks after Cathy and I started re-watching Futurama so "Omicron" reminds us of this guy: Lrrrrrr, Ruler of Omicron Persei 8. 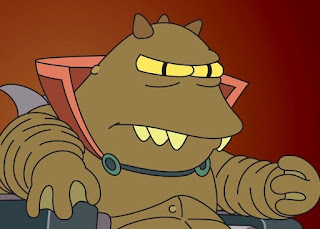 I've also seen a joke that "Omicron B" is an anagram of "no Crimbo", so we will have to wait and see whether everybody's plans get messed up. I'm not too worried though, because obviously, that's not how you spell Chrimbo!