Our decorations went up in early December. Unlike last year we have had people come into the house this year and they seem to like them, so I thought I'd share a few pictures on here.

First off - the Lego shelves. 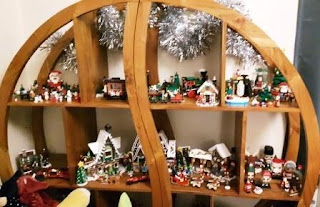 Over the years we have bought a few of the buildings that make up the Lego Christmas Village, and of course, I had to get the train! On the lower shelf is Santa's house, a gingerbread house and the clubhouse whre the elves get some well earned kip after working long shifts in the toy factory. The other assorted sets include all the Christmas-themed Star Wars figures from advent calendars in past years.

We have mistletoe new for this year too. 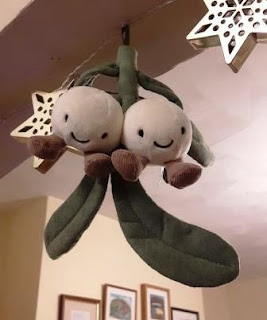 This is made by Jellycat, who make the most adorable soft toys. I bought this at a lovely little toy shop not far from my house called Honeycomb Toys. They have lots of cool stuff in there, including some great wooden toys. Well worth a look if you're in south Cardiff.
One of the highlights of Christmas for us is visiting the red and white craft stalls in the city centre, particularly the one run by Sian Davies, a ceramic artist from Abergavenny. We have several of Sian's creations including a flock of dragons that normally reside on our mantelpiece but hibernate in a crate over Christmas. This year we have a couple of sheep cutting a Welsh edge to our Christmas decorations. 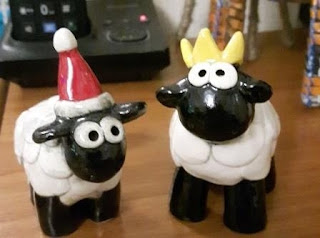 (I can proudly say that we bought one of the first Santa Sheeps than Sian produced because it was on a stall a few years ago as a one-off!)
Keeping it Welsh on the tree is one of Sian's dragon tree decorations. 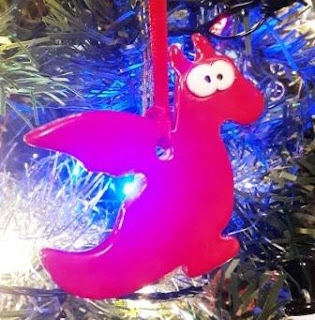 As of a couple of weeks ago, these dragons are now sold out this year. I bought the very last one off the stall to send to a friend who has been very generous sending me baseball cards this year. We have a few other ceramic decorations made by Sian - including this fun looking gingerbread man. 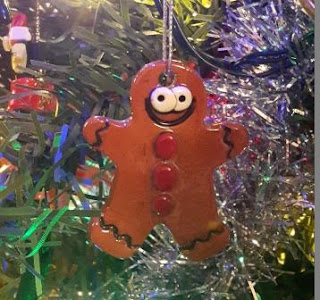 So, that's it for now. We love adding to our festive features so there will probably be even more next year!
Posted by Jongudmund at 21:54