I didn't manage the target Cathy set for me of watching 52 new films in 2017. But I did see 41, which isn't bad. Back in February I noted the ones I'd seen so far. I was going to do this regularly throughout the year, but, um, well, anyway...

I've decided to keep this review to just films that I saw on cinema release in 2017. I've included short summaries giving my verdict on the film.

*March*
Beauty & the Beast
Probably the most unnecessary remake in cinematic history, which is saying something. Emma Watson spent most of her time having to react to empty air where the CGI characters would be and it really showed she's not that great an actor. The additions to the cartoon, both songs and narrative, weren't much cop either. 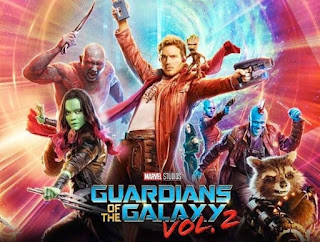 *April*
Guardians of the Galaxy Vol. 2
A sequel to my favourite film of recent years that I liked even better than the original. I got emotional at the end. Cracking soundtrack too. My film of the year, and probably of several years. I saw it twice in the cinema and then bought the Blu-ray when it came out. And the soundtrack. And a ton of merchandise. And the Lego sets. I collect Rocket Raccoons and Cathy collects Groots. That says a lot about us really. (It also has a very interesting religious angle, which I blogged about.)

*May*
Alien Covenant
AAAAAAAAAAAAAAARRRRGGHH! This film is so stupid it hurt me. I actually felt rage when I thought about it afterwards. Every STUPID thing the STUPID people did in STUPID Prometheus they went and did again! Walking out on the surface of a planet without a protective suit. Trusting the CLEARLY EVIL ROBOT so much you stick your face up close next to an alien pod-egg, even though you've just seen your crew-mate's decapitated head floating in a fountain. I mean, come on! How dull are you? Recycling every twist you can imagine from previous films and adding such an obvious one I was literally mouthing 'Please, no, don't do that' because it was so obvious.

Possibly contentious opinion: The best thing that happened to Star Wars is that is got taken away from George Lucas. Someone needs to do the same thing with Ridley Scott and Alien.

*June*
Wonder Woman
This film had flaws. I guessed who the baddy was going to be, because by now I have seen so many superhero films it's always going to be that guy who is just too helpful to the heroes. But Gal Gadot was a revelation. The scene where she went over the top of the trench into a hail of bullets and powered through inspired me. So, all in all, I thought this was great despite the flaws.

*July*
Despicable Me 3
Someone out there might still find minions amusing. Pretty sure even little kids are sick of this franchise now. It would make a good primer about how a movie can get totally lost through having too many sub-plots.

Cars 3
I would nominate Cars 2 as the worst Pixar sequel by miles. But this was great - the sequel Cars should have had. We took my Niece (6) and Nephew (4) to see it for Nephew's first trip to the cinema. Even they recognised it was a far superior film to Cars 2, even if I'm not sure they fully grasped the mature storyline of growing old and being replaced by the next generation coming through.

Spider-Man Homecoming
This was pretty good overall. It had a lot of humour and Spider-man is a dorky schoolkid again. Marisa Tomei is a brilliant comedic actor and was a refreshing change as Aunt May. Michael Keaton as a villain - what's not to love? I've seen 5 big screen Spider-man films now, and I think this one is probably the best. And it fits back into the Marvel Cinematic Universe, which works for me.

Dunkirk
This was very powerful, with a plot timing device I only got about halfway through. I'm very glad I saw it in the cinema because the aerial combat scenes needed to be on a big screen. I know this sounds daft but the sky is big and the sense of losing sight of a plane and not knowing where it will be coming from next was very well captured. The sense of desperation, of trying to escape, and repeated failures, ratcheted up the tension. It got to me and most of the rest of the audience, judging by how we all sat there slightly stunned afterwards.

*October*
Blade Runner 2049
My comment about Ridley Scott and Alien also applies to Blade Runner. Visually it was very arresting and evocative of the first film. There was too much gratuitous nudity and the plot really didn't bear much scrutiny. I would make a case that this film settles the argument and Deckard isn't a replicant. Which I know is controversial, but if you follow the logic through, he can't be.

The Lego Ninjago Movie
Two Lego movies in a year. If you want to see the Law of Diminishing Returns in action, here it is. This was some way off The Lego Movie and The Lego Batman Movie. It was still much funnier than Sing or Despicable Me 3 though.

Thor: Ragnarok
My third Marvel Comics Universe film of the year and a real departure for Thor films, which tend to be a bit slow and depressing. This was gaudy and colourful, so much so it felt a little bit like a rip off of Guardians of the Galaxy. I laughed a lot, particularly at the new character, Korg, who introduced Thor to the weird world he ended up on. Cate Blanchett was suitably villainous as Hela, but was under-used. Anthony Hopkins phoned in his part as Odin for the third time in three films. But overall I enjoyed it a lot and it's easily the best of the Thor films.

*November*
Loving Vincent
This was an oddball one - an animated retelling of the tragic death of Vincent Van Gogh, with the twist that each cel of the animation was painted in the style of Van Gogh's art. I was intrigued by the concept, which worked some of the time, and learned quite a bit from the story. Some of the voices didn't work for me, especially Chris O'Dowd's indomitable Irish accent that felt very out of place. If you are a fan of animation, quirky films, or art, then this might interest you.

*December*
Justice League
Yay, Gal Gadot is back. This was my first real encounter with Batfleck. He didn't really do it for me. As a 'getting the team together' movie, it works better than most. Superman is still a superhero I don't care about. It was supposed to be a big secret he was in this film, but then I saw the toy sets in the supermarkets and noticed the S logo was included in the poster. Here's a tip, film-makers, if you want to hide Superman's presence in your movie, don't put his logo on the poster! In my opinion, DC is a long way off Marvel in terms of films that I want to see. Suicide Squad was the worst film I saw in 2016. The other Superman and Batman films up to this one have looked just awful. This didn't really win me over but I might give Justice League 2 a look when it rolls around.

The Last Jedi
I saw this twice before the year end. I thought it was great and have posted a long review about it already.

In summary
I watched a lot of superhero films this year, which is a bit embarrassing, but, hey, I go to the cinema to be entertained. Some quick 'awards':

Worst film: Alien Covenant, although Beauty & the Beast ran it a close second.

Most unexpected character appearance: Sauron in The Lego Batman Movie

Biggest twist: What happened to Snoke (trying not to reveal a spoiler there)

Best visual moment: the speeders carving up plumes of red dust across a white salt field in the battle of Crait, closely followed by Wonder Woman deflecting machine gun fire as she walks through no man's land
Posted by Jongudmund at 21:42