I saw Midnight Oil play at the Greenbelt Festival in 1994. My dad wanted to go to Greenbelt, a Christian arts festival, to see what it was like. I was massively into Midnight Oil so jumped at the opportunity. I liked their meaningful politically-informed lyrics. They had some good tunes. They were Australian and that meant they were a bit different, but unlike Australian pop stars they sang about Australian issues and didn't seem to be trying to be generically likeable everywhere.

I don't remember much from that gig. I remember they had borrowed a didgeridoo player who had an artificial hand. And I remember thinking they were great.

And then life happened. They played a couple of rare gigs in London at the end of the 90s, but I didn't have the money or the wherewithal to get there. It was hard to find out what was happening with the band, pre-Internet. They weren't cool enough to get featured in NME or Melody Maker. Then the band went on hiatus. Peter Garrett, the lead singer, went into politics, getting elected to the Australian Senate and ending up as Minister for the Environment.

So, that was that, I thought. I'd seen them play live once and considered myself lucky. Other bands have come and gone who I never got to see. And if I'm honest, my musical tastes had changed. I had become slightly obsessed with the Tragically Hip, who I got into because they collaborated on a protest song with Midnight Oil back in the mid-90s. While it's sad to think you'll never see a revered band again, I kind of made my peace with it.

And then Cathy told me they had reformed and were touring again. I was very excited. Their only UK gig was in London, at the Eventim Apollo in Hammersmith. Cathy bought the tickets. She also found a bargain price for the Novotel the other side of the Hammersmith flyover from the venue, and here we were, 23 years after I first saw them, off to see Midnight Oil. 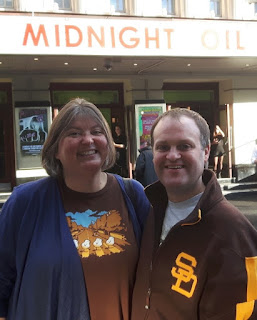 The audience was mainly Australians, at least sitting around us. I was surprised when the set-list kicked off with Beds are Burning, their only real worldwide hit. They continued to play all the tracks off their biggest album, Diesel and Dust, in order, but didn't play the last track on the album, Gunbarrel Highway, which is my favourite one. So that was a tiny bit disappointing. They then kicked into a setlist of other songs, but nothing from later than Earth and Sun and Moon, the album they released in 1993. Weirdly, I could have been watching them back at Greenbelt all those years ago. 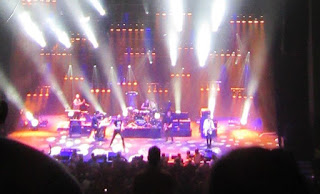 So, the big question: were they any good? Well, yeah. A bit rusty perhaps. Peter Garrett has slowed down a bit and doesn't do his trademark stuttering dance as much. He tried though, bless him. 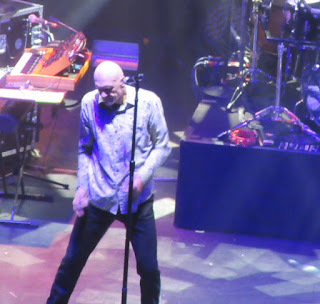 And they made some odd choices. I'm not sure why they played Diesel and Dust like that. Maybe it's what the punters want. They also decided to do Koscziusko, one of their most driving rock songs, as an acoustic version to start with, which didn't really work and sucked all the power out of the song. They included some of the real oldies, like Stand in Line, and I really liked the way they sang Now or Never Land, but that's just a beautiful song of hope that has become ever more timely. 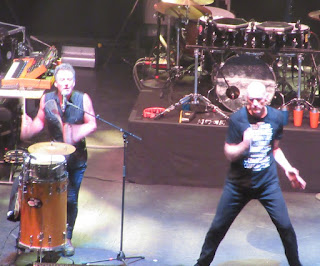 I was left with that strange sense of feeling really happy to have seen a band play who I never thought I would see again (and get the chance to buy two t-shirts!) and feeling wistful about the missed opportunities. Obviously, it's one of my highlights of the year, but it could have been even better than it was.