Highlights of 2017: Graduating with a MSc

I feel a bit embarrassed to be writing about graduating with a MSc in Business Psychology, but if I can be indulged as I pat myself on the back for a short post, I'd be grateful.


2017 saw the culmination of my post-graduate degree that I began back in 2014. By the time it had finished the course had moved campus, I had learned a lot about organisational psychology, and I had changed jobs, partly because of a classroom exercise.

The first term was a basic introduction to key concepts like motivation, job satisfaction and burn out, which were three themes that really interested me. We did the burn out quiz and I scored very highly compared to other people on the course. I remember looking at the results and thinking, 'I need to change jobs'. Nine months later I had started a new role, leaving behind a job I realise now I had stagnated in.

At the start of the second term, I received a significant diagnosis, which resulted in being put on medication that had significant effects on my ability to concentrate. Fortunately I was off those particular drugs by the April. I just about scraped through that module, recording just above the 40% cut off. But, hey, a pass is a pass.

For the second year our lessons moved from the Caerleon campus to Trefforest. This was better for me in terms of travel, although not for my class colleagues, who were all travelling from Bristol. At some point during this year we were all asked if we were willing to be photographed for the course prospectus. We all agreed and I really liked my photos. However, I clearly wasn't sexy enough to be the face of Business Psychology in future years.

In the second year, we did the course I found most interesting - External Communications. This focused on cognitive psychology and examining how we are manipulated into buying things, showing brand loyalty, and so on. I wrote an essay about the psychological techniques the Lego company use to boost sales. They use a lot, although I can't say for sure that they do it knowingly. I saw great correlation between marketing techniques I'd read or heard from various gurus and psychological theory, and the whole subject really engaged me. I blogged about Neuromarketing at the time.

The Leadership module didn't engage me. Partly because the lecturer was a few weeks away from quitting the university to go and work for a rival. The subject matter felt very much like a run of the mill business theory course. And in the first week the lecturer started talking about how all the problems in the NHS were down to poor leadership. I thought this was hilariously simplistic and told her so. She told me I should read the Francis Report into the Mid Staffordshire scandal, and didn't seem to hear me when I said that I had written a white paper partly in response to the Francis Report.

I've been very lucky to have a job where I have met a number of NHS CEOs, not to mention Medical Directors, Nursing Directors, executive directors of all shapes and sizes. Generally I think they are all very smart, committed, people who really give a damn about doing a good job and somehow keeping the NHS limping along. The truth is, though, NHS organisations are unleadable. They are too big, too riven by competing interests, too underfunded and over-demanded, too entrenched in delivery mechanisms that were always a compromise, and are basically organisational oil tankers that need turning circles the size of cities. Anyway, she wasn't having it. She had never worked in the NHS but knew how to fix it. I just shrugged and left her to her delusions.

The last section of the course was a dissertation. I did a study trying to see if positive reflection on work affected job satisfaction. I didn't find any statistically valid effect except that if you ask people to reflect on their successes they are more likely to be dissatisfied with the performance of their manager. This is bad news for me as I now line manage three people, so I obviously need to make sure they only think about their failures and not their successes! (Only joking!)

The dissertation took up the latter half of 2016, particularly the final three months. When I finally submitted it in January, the feeling of relief was immense. I remember going with Cathy to the cinema and sitting there and realising that I didn't feel guilty about doing something fun for the first time in months.

The graduation ceremony was fun too. We were arranged in order of qualification and then alphabetically by course title. There were only four of us attending the graduation and 'Business Psychology' was the first of the MSc courses listed. One of the PhD students didn't show, meaning that my friend Nick was the second person called on stage and I was the third. We had an address from Steven Moffatt, the Doctor Who show-runner. He was quite funny but overdid the message of how badly his generation had messed things up for the generation of fresh-faced youngsters who made up the majority of graduates there. 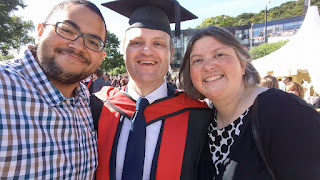 I was very pleased to share the day with Cathy. and with Connor, who had come down from Birmingham for the event. Cathy was my rock during the dissertation in particular, but she has also been a tremendous support throughout the course. Without her, I'm not sure I would have carried on post-diagnosis back in 2015 so it seemed only fitting that I let her share my graduation hat! 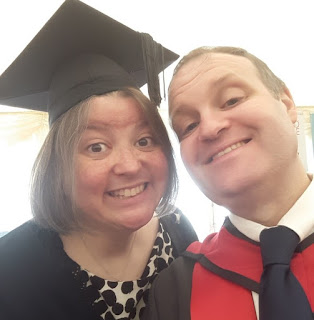