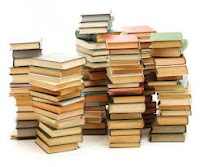 Since 2002 I have been noting the books I read and giving them a review of between one and five stars. A bit sad, I know, but it’s helpful when I can’t remember whether a book was any good or not.

Anyway, here’s a list of the books I’ve given five stars to. I was a bit surprised at some of the ones on this list. Obviously I really liked them at the time. I’m not sure I’d rate them all so highly if I read them now. That shows how subjective this is. I’m also interested by what is not on there – no J.D. Salinger, for example.

I’ve noticed that as time has progressed I’ve stopped rating Christian books so highly. I’ve also started reading more well-known authors, which is probably the influence of my book group. But I’ve awarded fewer five star ratings as time has gone on, so I’ve given F. Scott Fitzgerald, Salinger, Solzhenitsyn and others four or four and a half star ratings, where a few years earlier they would probably have got a five. (This also explains why Stupid White Men is in this list. I don’t think I’d give that a five now.)