This year Cathy and I will celebrate our 15 wedding anniversary. That's 'crystal' in case you were wondering. Apparently, we aren't celebrating it by getting a chandelier in our front room. (I've asked.)

I've been asked a few times when I knew that Cathy was 'the one'. I'm not sure I really believe in the idea that there is 'the one' for everybody. But there were a few times when we were first walking out together which gave me clues that we should stick together.

One of the main ones was when I first visited her house away from Uni and discovered she had kept all her Space Lego and Fabuland, with the Fabuland mostly in its original boxes. She even let me play with it (under careful supervision of course!)

I'm not saying I married Cathy for her Fabuland sets, but it was a confirmation that this wonderful person took toys seriously! She could appreciate that I still had most of the accessories from my Action Force and Star Wars figures. She didn't mind that I wanted to collect the entire AF range as an adult, buying the figures I never had as a kid. In fact, many, many trips to boot sales, antique centres and the like prove that she took an active interest.

I had a reminder of the Fabuland moment recently. We've been clearing out the loft in anticipation of fitting insulation and in one of the boxes of Cathy's stuff found a mint copy of the Lego Catalogue from 1986. 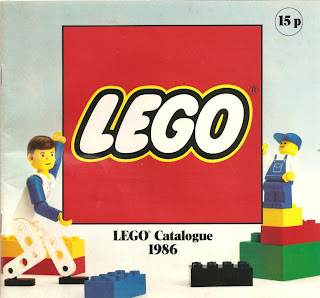 I was excited by this as it had two full pages dedicated to the Lego Technic Arctic range. I had the two biggest sets in this range and still have the 6-Wheeled Snow Ranger in near-complete built form.

The mini-bulldozer got broken up for it's pieces, as did the Mountain Rescue Base, although I still have the building instructions and could probably put them back together. Seeing these pictures brings back some good memories of spending most of Christmas Day building the Mountain Rescue Base and using the pneumatics to raise and lower the helicopter lift. It was the first set I had with a pneumatic system in.

Very few people ask me for relationship advice, but I guess the one thing I've learned is to care about the things your other half cares about. That's a measure of how much you love and respect them. That's when you know they may be the one for you.