A final story about Grandad (for now) 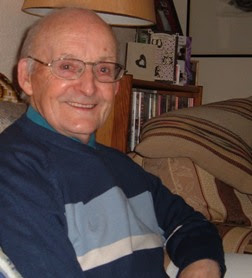 I managed to give my tribute to Grandad yesterday. This was the last story I told...

And I also learned from Grandad that the greatest gift you can give the people you love is the time you spend with them.
I’d like to end with one story, which has been told and retold in our family so often that it has passed from tale to fable to legend. But it’s still worth hearing, and maybe you won’t have heard this.

When Grandma and Grandad used to come and visit us in Shrewsbury when Dave and I weren’t little, but were littler that we are today, we would always greet Grandad with the same question: ‘Did you bring your old shoes, Grandad?’

I realise that may sound like a bit of an odd question for kids to ask. But the reason we asked it was this – if Grandad had brought his old shoes that meant he was going to be able to come across the road with us to the football pitches and play football. (Bear in mind he was probably in his late sixties at that point, but still – playing football with Grandad was something we really looked forward to.)

On one occasion Grandma and Grandad arrived and we eagerly asked the question: ‘Did you bring your old shoes, Grandad?’ And he hadn’t. I don’t think me and Dave were very good at hiding our disappointment, so even though he hadn’t brought his old shoes to wear, he agreed to come across the road with us to the field and play.

So, we were playing football. And Grandad swung his leg back to really leather the ball and he connected with it beautifully. But there was a really loud ‘pop’ and we wondered what had happened. The upper part of his shoe had completely disconnected from the sole, which was flapping underneath. That kind of curtailed our game, even though as the master fixer-upper he was able to loop the lace underneath and tie the shoe together.

Grandma wasn’t very impressed when we got home. Especially as Grandad then had to wear his jerry-rigged shoes to church the following day. He wasn’t embarrassed, although if I remember Grandma felt mortified. And, later we used to laugh about it. ‘It was a good game we had though,' he said. ‘Up until that point.’

If you can permit me a moment of indulgence I’d like to add something to that story. I know Grandad had a faith and it’s a faith I share. And part of that faith is the hope and the certainty that this moment in time, this parting, is not forever. I know I will see him again and he will see me, and we will recognise each other. I don’t know when that will be, but I know that compared to the length of history, it will be in quite a short time.

And in my mind’s eye I imagine that meeting. And I can almost imagine him standing there, holding a slightly lumpy bag, and smiling his slightly cheeky smile. And I’ll look at him. And I’ll look at the bag.
And I’ll ask ‘Did you bring your old shoes, Grandad?’

And I dearly hope he says yes.
Posted by Jongudmund at 19:06