So exciting, even Cath got out of bed to look at it!
Yes, that’s right. We have snow. Apart from a tricky skid in Grangetown at the beginning of my journey I loved driving in this morning. For one thing the trees and bushes were all dusted white. For another the roads were clear because most of the schools were shut and so the usual mums on the school run weren’t out.
It strikes me that the contribution to global warming caused by people driving their kids to school probably cuts down on the number of ‘snow days’, meaning that people have to drive their kids to school more frequently, increasing carbon emissions, thereby reducing the number of snow days… It’s a vicious cycle. But it could be broken if some of those little porkers were made to walk to school. 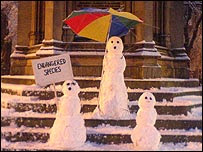 But anyway, snow. I love snow. I don’t love slush though. Especially when I step out of my car into a slush heap and it gets my sock slightly soggy. Not so good.
And the snow was an inspiration in more ways than one. Every Monday and Thursday we have an organisational prayer gathering (if people can be bothered to go to it). Today’s was on the subject of snow, co-incidentally. Actually the guy up the front, Roger (the VAT-Dodger) from Finance, admitted that he only decided what to talk about last night. At least he was honest. I’ve lost count of the number of times the person in charge has obviously panicked at the last minute, picked up their Every Day with Jesus and decided ‘you know what, this’ll do’.
It’s started to rain now, and the snow’s melting, but I reckon most of it will hang about until tonight when it will FREEZE and cause havoc. Hurrah.
Posted by Jongudmund at 20:38