The spiritual message of shoes

One of the hazards of working in a faith based charity is being asked to do workplace prayers. I landed leading today's on "feet fitted with shoes of the gospel of peace". I started off with some pictures I nabbed off google image search (apologies if these are your photos and I didn’t credit you).

Shoes…
…some we need as part of our job description 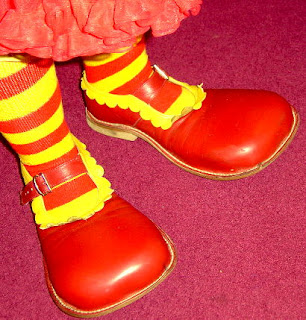 …or they make us laugh

…or we wear in season, like for St Patrick’s Day 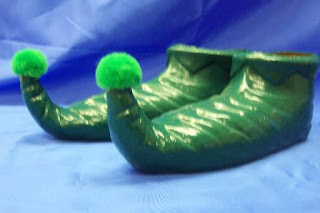 …or they make us go ‘awwwwww’

…and some people even worship shoes. 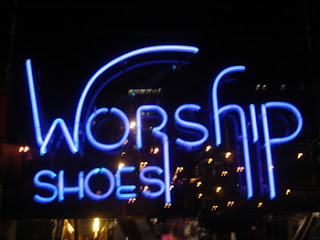 (Like my sister in law who seems to get sucked into any shoe shop she walks past by some kind of vortex.)

And shoes are something we leave behind. 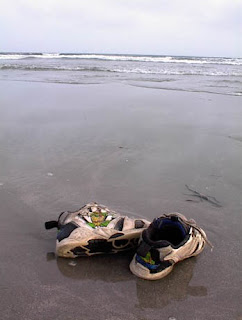 Like these shoes were left behind in Dachau, Auschwitz and Stutthof. 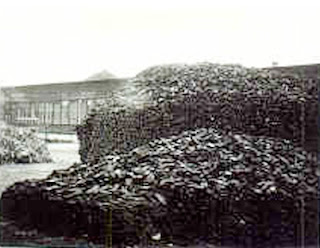 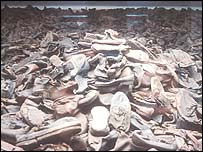 Some thoughts on peace – from my notes, so apologies if it’s a bit disjointed

Shoes might seem an odd focus point for peace. But this was the Roman Empire, which boasted that wherever the legions marched they brought peace – the Pax Romana, enforced throughout conquered lands.

Paul is being deliberately subversive here. Comparing the peace brought to the lands groaning under Roman boots, he says ‘No, we wear the shoes of the gospel of real peace. We’re the peace-bringers not the Romans. Our peace is good news not oppression.’

And of course that was quite a dangerous message to promote at the time, and possibly today – telling a mighty Empire that real peace couldn’t be imposed by force. [Pause] That peace that comes from the threat of the sword isn’t really peace at all.

I’ve often heard it said that when it comes to peace we should aim for peace on a micro level. Peace in our families, in our teams in work, perhaps between the teams in work, in our churches (yeah, right!), in our communities. And I agree with that. But sometimes I think we downplay peace. I don’t think ‘peace’ – real peace – is about just getting on with the people we see most days and being nice. We have to have a wider view too.

Of course, it does start with us. I remember an American good friend of mine saying once how fed up he was at the casual way people made comments about ‘typical Americans’. And it’s something we can all do. But on what basis do we attack someone because of their origins – whether that’s French, German, Irish, English or Welsh?

The thing is – the reason we’re called to be peacemakers on a larger scale – is because we, as Christians, should realise, that it’s not where you’re from that matters – it’s where you end up.
In the current climate of six nations rugby, ashes humiliation and other sporting allegiances, it’s a daring statement to say that on one level, being racially proud is totally illogical – I may as well say I’m proud to have blue eyes and brown hair, as I’m proud to be British, or English, or Welsh.
I had no choice in my eye colour, my hair colour, my skin colour, my country of birth, or my genetic heritage. Why then, if I had no choice in the matter, should I rejoice in my nationality?

Am I grateful to be British? Yes.
Am I proud? No.
It makes no sense to me.

When it comes to what I’ve chosen to do with my life, I follow a Jew. A member of a race still maligned, despised and hated today. When Jesus was alive the Jews were barely tolerated by a colonial superpower. Many of his countrymen desperately wanted to be something else – in fact people across the then-known world would happily pay a fortune to call themselves a Roman. For others, the Jewish nation identity was all they had – they would fight for it and die for it. Not long after Jesus died, most of those ultra-nationalists met a disastrous end in a fortress on a desert outcrop called Masada.

Was Jesus hung up on nationality? A little bit. I guess we all are. But when his words were put into practice, one of his followers – a Roman citizen no less – said there was no distinction between Jew and Greek, that to the Jews he would be a Jew, and to the gentiles he would be a gentile. This man, Paul, was now a citizen of a far greater empire than Rome, and to be regarded as a Roman, while useful, wasn’t that important. When he wrote to other Roman citizens – in the staunchly Roman colony of Philippi – he wrote to them as "citizens of heaven", not Rome.

That same follower of Jesus instructed his fellow followers to wear the ‘shoes of the gospel of peace’. Some versions say ‘shod with the readiness of the gospel of peace’. That we are prepared, wherever we tread, to bring good news; to bring peace. We aren’t a battle-ready army preparing to crush our enemies underfoot. We walk humbly, leaving behind us gentle footprints, that mark where we have gone and don’t fade.

But those footprints of peace leave lives changed.