The good, the bad and the Uzbek

Today is National Day in Uzbekistan. 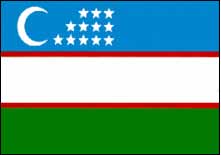 I know very little about Uzbekistan, except that it used to be part of the Soviet Union until independence on August 31, 1991. So, I thought I might try and find some stuff out about it, which I’ve handily categorized for readers as The Good, The Bad, and the Uzbek.

The Good
• Uzbekistan is Central Asia's most populous country with a population of 26.9 million people. So, it is a real country, unlike say Leichtenstien.
• The most popular beverage in Uzbekistan is tea and teahouses are impirtant social meeting places. Liking it!
• Tashkent, the nation's capital and largest city, has a 3 line subway built in 1977, and expanded 2001. (OK, perhaps not so good if you aren’t interested in underground railways, but I kind of am, so it’s going in as good)
• Uzbekistan is now the world's second-largest exporter of cotton and the seventh world major producer of gold. Good for them.
• The life expectancy in Uzbekistan is 63 years for men and 70 years for women.

The Bad
• Uzbekistan is doubly-landlocked, meaning to reach a proper sea you have to cross at least two borders because all it’s neighbours are landlocked. The only other country like that is, coincidentally, Leichtenstein, but that’s not a proper country anyway (see above). Uzbekistan does have access to the Aral Sea, which is really just a big lake… so no beach parties in Uzbekistan.
• Uzbekistan possesses the largest military force in the Central Asian region, having around 650,000 people in uniform. And it’s a repressive police state that’s pretty much a dictatorship in all but name.
• In 2005, Uzbekistan was included in Freedom House's "The Worst of the Worst: The World's Most Repressive Societies". In May 2005 security forces in the Andijan province carried out what Time magazine called “one of the bloodiest assaults any nation has inflicted on its own population since Tiananmen Square.”
• Although it’s a secular country that allows freedom of religion, president Islam Karimov is worried about the growth of militant Islam and has been cracking down on it. Which, as we all know, tends to make the nutters even more dangerous…

...and the Uzbek
• The name Uzbek, both for the people and for the nation itself, is said to be self-referential from the period the Russians first encountered the people, parsing as ozum bek, or "I am the lord (or ruler)". You’ve got to like that!
• Another Uzbek phrase I learned during this research is: ‘qovoq kalla’, which means ‘pumpkin head’.
• Football terms include: ‘Qanot yarim himoyachisi’ (chap, o'ng) = Winger (left, right); ‘Yarim himoyachi’ = Midfielder; ‘Himoyachi’ = Defender; ‘Hujumchi’ = Forward/striker. The national team play in the Pakhtakor Markaziy Stadium in Tashkent.
• The word for ‘sneeze’ is the wonderfully onomatopoiec ‘aksirish’.
• The currency is 1 Uzbek som = 100 tiyins.
• Uzbek websites have the suffix .uz; the international dialing code is +998.
• The 12 stars on the Uzbek flag (above) represent the 12 months of the Islamic calendar, while the new moon is both an Islamic symbol and represents the rebirth of the nation following independence.
Posted by Jongudmund at 17:56