Yesterday I bought a B-daman launcher in Woolworths on Cowbridge Road East, mainly because it was reduced. I've been looking at B-damans for a while as they have that nice manga styling that you get in the Japanese toys, plus they're quite funky little ball launchers.

Helen had told me how tricky they'd found building one for their lad Adam, but I can only conclude that they obviously aren't very adept at putting together kits. It took me about 15 minutes to get it ready for action. One cool thing about them is that they give you some extra stickers to customise him.

My little guy is called Proto One. 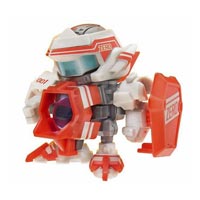 As you can see he's mainly red and white, with a nifty little shield. The grey bits you can just about see underneath are the b-daball launcher, and all the rest is just for show. This wouldn't be my first choice for a colour scheme. I'm going to keep and eye out in case there's one in blue and amber.

I went into Toys R Us in Gloucester today and they had loads more of them reduced, including some in import Japanese packaging. I'd be tempted, but the instructions were a bit tough to follow in English... No point making it harder for myself.
Posted by Jongudmund at 23:06