It’s kind of an open secret that back towards the end of last year I wasn’t feeling too good. I took six weeks off work and started on some medication. Which meant that earlier this year I celebrated my 30th birthday feeling like a bit of a cliché: a writer on Prozac. How original.

One of the things that helped me get my head straight was rediscovering philately – stamp collecting to those who have an aversion to fancy words. I’ll bet you didn’t know that the most reproduced image ever in history is the portrait of the Queen by Arnold Machin that appears on UK definitive stamps. People often call them ‘Queen’s head’ stamps, but their technical term is Machin definitives. I spent a number of hours sorting through boxes and bags of stamps and compiled all my Queen’s head stamps into the right order in a large album – making sure my Machins matched.

Cheap therapy
The thing about stamp collecting is that it requires a lot of concentration, but isn’t actually very important in the long run. It’s time-consuming, but if you make a mistake, it’s not the end of the world. And therein lay the secret of why it was so good for me – at a time when my head was running with itself in terms of crazy thoughts, something so mundane could keep me enthralled and prevent me from stressing out.

I’ve kind of kept up with it this past year. Recently through a couple of chance finds I’ve become quite interested in stamps from the South African colonies before the Unification of South Africa in 1910. Considering these small bits of paper are up to and over 100 years old, they’re quite easy to find and, best of all, cheap. The other day I noticed the following stamp for sale on eBay, hard-to-find and consequently not cheap. 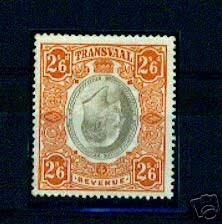 Head’s up
I just love this stamp. I didn’t bother bidding for it because it was pricey, but I did copy the jpeg onto my hard drive. It makes me laugh, because it goes to show that we are all human. I don’t know if anyone showed King Edward VII, who was a keen philatelist and took a personal interest in designing the Royal Mail’s stamps, but if they did, I wonder what he thought of it?

Errors are big business in stamp-collecting. Mainly this is because they’re rare. When an error is discovered, the remaining stock is usually destroyed. They don’t tend to happen so much nowadays, anyway, because of the computerised printers that are used (although some Machins got printed a couple, of years ago without £ signs on). This kind of error is possible because the plates were assembled by hand, and each section of the stamp was printed seperately.

My point – and I do have one
It would be interesting to know what happened to the hapless printer (let’s call him Bob) who loaded the central image the wrong way up on this stamp. I can imagine Bob came in for some flak – maybe he was ‘investigated’ by his managers. You can bet Bob’s mates would have ribbed him mercilessly: "Hey Bob, you on the printer today? Don’t forget to put the King’s head in the right way up! Har har har!"

But the irony is that Bob’s cock up is now worth quite a bit, whereas all the printers who paid attention and never screwed up produced stamps that are worth only pennies now.

I don’t want to spoil this story by drawing a lesson from it, but it’s worth adding that I sent out a press release yesterday about an event that’s coming up. It was a beautiful press release – the headline was great, the quotes were great, it ran together nicely, it was concise and to the point.

The only thing I forgot to tell people about was the date.
Posted by Jongudmund at 09:00