Review of my record-breaking football season

On Wednesday I went to my 60th and final game of the 2021-22 football season. This was a record number of games for me and through judicious planning I ended on a nice round number!

The result of the game on Wednesday was disappointing, as Wales succumbed to a late, late goal and lost to the Netherlands. At the end of the game, Gareth Bale's body language said it all. 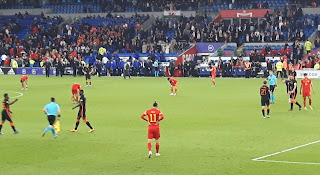 Still, at least the rain held off. I got there early with my friend Paul and we were able to thoroughly dissect the Barry Town AGM that we attended the previous week, and discuss how we felt the team would fare in the coming season in the Cymru South.

Anyway, on to my season stats, courtesy of the Futbology app. 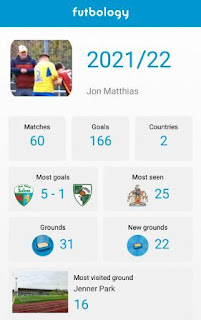 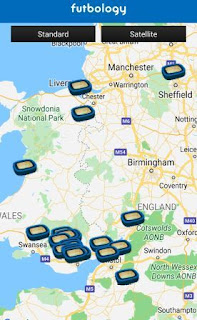 The majority of new grounds were in South Wales, naturally. Hillsborough in Sheffield was an outlier. The two grounds in North Wales were The Rock in Cefn and Cae y Castell in Flint. Over there right in the middle of Cardigan Bay is Aberystwyth Town.
The grounds I visited in South Wales fir the first time tended to follow the A470 corridor up to Merthyr Tydfil. 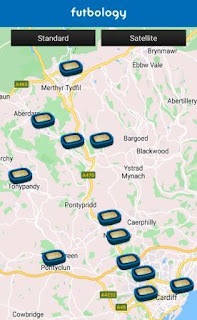 Heading from the bottom of the map, there's Bridgend Street's ground in East Cardiff, then that line of five grounds in sort of a row are Canton Liberals's brand new pitch in the Cardiff International Sports Village, Lydstep Park in Gabalfa where Cardiff Draconians play, Cardiff Corinthians's ground in Radyr, Taffs Well FC and then the University of South Wales sports park in Treforest that Pontypridd Town call home. Also on the map are Pontyclun, Clydach Vale, Treharris, Penrhiwceiber, Aberdare and Penydarren Park in Merthyr which hosted the Ardal Southern Cup final at the end of May.
The last two seasons really have been famine followed by feast. After the pandemic curtailed the season in Spring 2020, there was an entire year (actually 16 months) where I didn't go to football matches. This is reflected in my graph of games attended with a grand total of zero games rocketing up to 60. 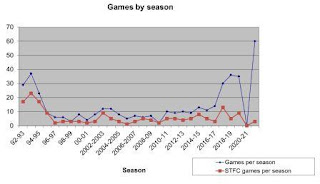 If the 60 games this season had been spread over the last two seasons I would be round about average compared to previous seasons. At the start of the season I had secretly hoped to make it to 40 games. I overshot that target by a considerable distance, despite the lockdown in Wales suspending football here for about a month over Christmas. I more than made up for that with my 'decamonth' in April - although that wasn't the month with the most games; I started the season strongly with 11 games in August.

And that just about wraps that up. There are already details of friendly fixtures coming through for a few weeks' time. The new football league season starts on 30th July. Football will be back soon enough!