Following on from my end of season round up, here's a gallery of selfies with the many people who have made matchgoing fun in my record-breaking season.

First up, my friend Paul said he noticed that I didn't mention him in my review of May even though he came with me to both the Welsh Cup final and the Ardal Cup final. So here's a pic of us at Penrhiwceiber Rangers. 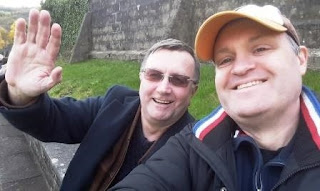 At the start of the season I persuaded my friend Matt to come with me to Aberystwyth. 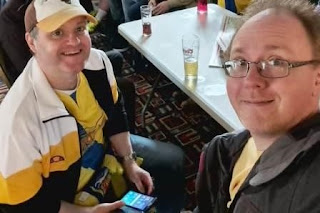 While my friend Tom persuaded me to go to Aberdare. 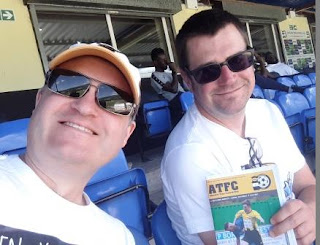 I've been going to games with Steve for several years now. In addition to three Poole Town games, he also joined me on my first visit to Cardiff Draconians this year. This photo, however, was taken at the University of South Wales sports park, home to Pontypridd Town, and one of the 22 new grounds I visited this past season. 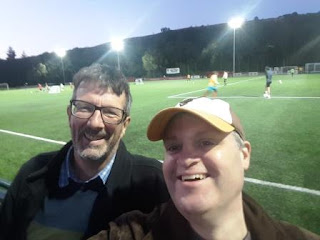 Speaking of universities, Callum joined me on a grim night in Cyncoed to watch Cardiff Metropolitan play Barry Town. 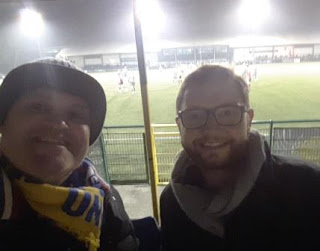 I invited a lot of people along to watch Barry games this year, including James who I met on an internet forum and who joined me for a day out in Flint. 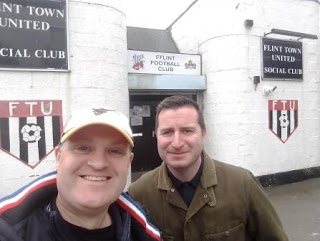 And my Mum came along to Jenner Park as well. She knitted us hats! 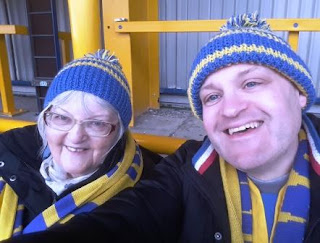 Here's a pic of Mum in more familiar surroundings as we watched Shrewsbury beat Lincoln on Mother's Day weekend. My nephew Zac was there too. 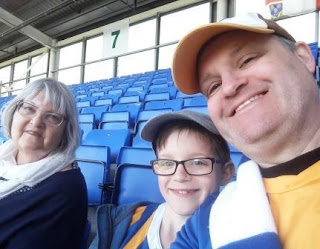 Earlier in the season, Zac was part of a boy's trip to Sheffield with me and his dad (my brother Dave). 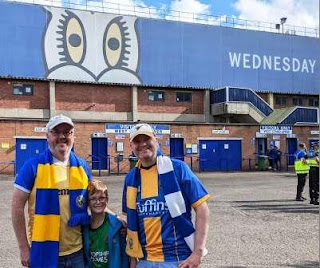 I also watched Shrewsbury battle to a 0-0 draw against Accrington alongside Dave, but I didn't take any photos of that.
I did, however, take a photo of me and Zac at Barry's last game of the season. It was a proper uncle-nephew day out with a stop in McDonald's on the way there and the way back. 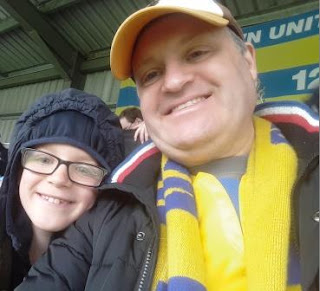 He's smiling there, even though he was later very frank about just how rubbish the game was.
In one of the last games of the season I sat next to my former work colleague Scott as we watched Treharris Athletic somehow lose the most one-sided game I have seen in a long time. Their opponents were Caerau Ely who had one shot on target - a penalty - and the rest of the game was conducted mainly in the Caerau Ely penalty area. 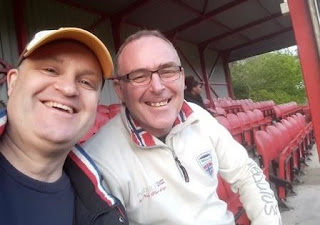 There are some other people I saw at football matches and neglected to take photos with. I sat with the other Steve H and his son Adam (Cathy's uncle and cousin, respectively) at a game in Longlevens in Gloucester. And I sat next to my friend Ben at Caldicot Town. He was injured otherwise he would have been playing for Caldicot.
But in the absence of photos of them, here's another photo of Paul. When Barry played Connah's Quay, they had bouncy castles and and ice cream van in Jenner Park. So we made the most of it. 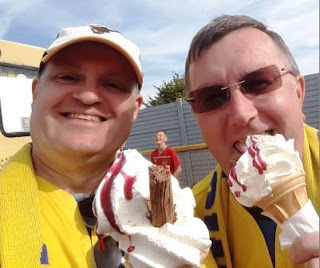 (And, yes, I know the photobombing child looks like he's in my ice cream!)
Posted by Jongudmund at 18:39