And we are back! Pre-season and opening Football League weekend review

The end of July and beginning of August saw the return of the Football League with an earlier than ever opening weekend date of 3rd August.

However, on the last Saturday in July I timed a work trip to also catch the last Shrewsbury Town friendly of their pre-season warm-up, against Scottish Championship side Dundee United.

Lenny the Lion had dressed up to make our Scottish visitors feel at home. 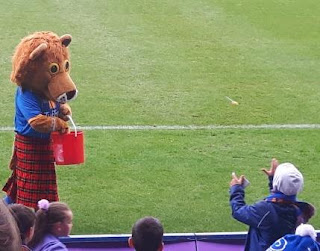 Or maybe he had swapped allegiance, I'm not sure. 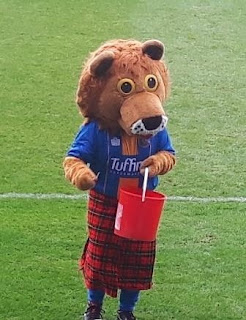 Whatever, I got some "mascot loot" 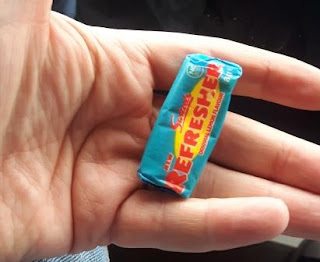 My Mum had got the tickets for us. Only the main stand was open for home fans, which meant that we got to see the teams facing forward for the handshaking rigamarole.

The Shrewsbury team had squad numbers but no names on their shirts. It was the first time I had seen the new shirt being worn and I liked the look of it. 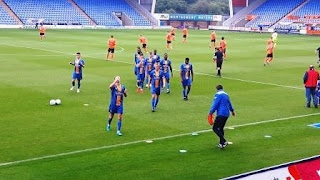 Obligatory selfie with football companion. One day I will learn how to do these. 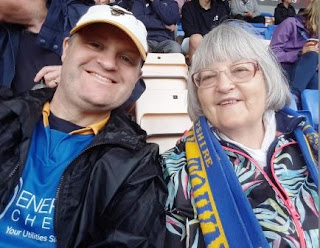 We were both in waterproofs because the weather had turned horrible. It had not deterred the very respectable-sized away crowd though. Props to these fans. 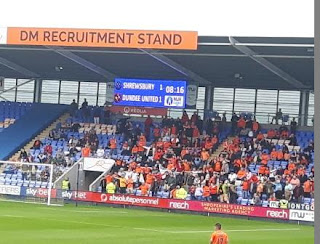 It was a good game to watch. Shrewsbury have clearly worked on their system in the close season and two new big centre-backs as part of a central three look really solid. After 7 minutes, the game was already 1-1 thanks to a penalty each. Shrewsbury won with a second half goal from Fejiri Okenabirhie, or Fey as he's known. The team looked very tight defensively and a real threat going forward. It left me with an unusual feeling about the new season: mild optimism.

The following Friday was a chance to see Barry Town's new post-Europa League signings in action against Swansea City's Under-23 team.

Right from the off, Swansea were ready for it, standing in attack formation while Barry were still in a huddle. 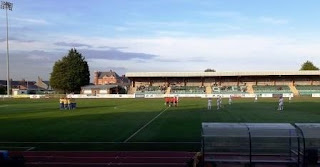 I don't want to sound disrespectful to the newly rebranded JD Cymru Premier League, but I doubt there will be many better sides gracing Jenner Park this season than the City youngsters. It finished 2-1 to the visitors, with Barry's Jonathan Hood scoring a screamer for their goal. He doesn't do tap ins, as his Sgorio Highlights reel shows. 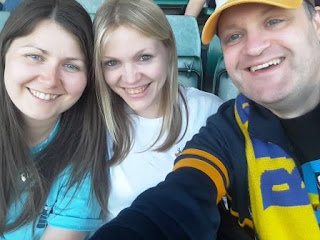 (They both managed to look at the right bit of my phone!)

The following day was the opening round of matches in the English Football League and I went back up to Shrewsbury to see them take on Portsmouth. Mum has decided to renew her season ticket at least for this year and had got me the seat next to her.

It is still a strange experience going to games without Dad. Before the match we went to the little memorial garden and looked at the plaque in memory of him. 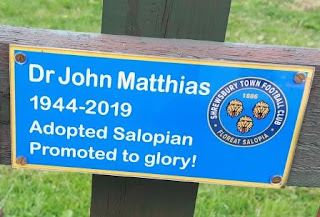 "Promoted to glory" is an old Salvation Army phrase. Dad wasn't a Sally Army member, but he would have approved of the concept. I think it's a really nice touch that the club have a memorial area, and it was good to take a couple of minutes to remember the man who ignited my love for going to football matches.

We also stopped in the club shop so I could buy a shirt. There was a run on them and I had to ask a slightly overwhelmed staff member to have a rummage out the back to try and get one in my size.

Lenny was no longer playing dress up and was back in shorts today. 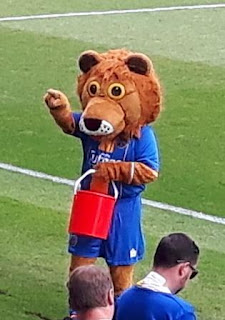 My dad's occasional football buddy, Brian, had bought a ticket and was sat next to us. He is even less skilled than I am at appearing in selfies. 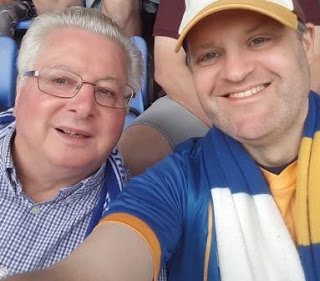 And I had my Mum sat on the other side as well. 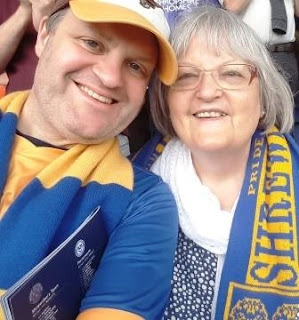 As for the game, well, Portsmouth turned up in a thousand wash grey away strip.

The visitors dominated the first half, had multiple corners and looked the most likely winners. Then local lad Ryan Giles scored an absolute worldy of a goal to put Shrewsbury in the lead and despite some real pressure, Portsmouth just couldn't score. They are tipped to be in the hunt for promotion this year so it was an excellent three points for Town and always great to start the season with a win.

Mild optimism is a nice feeling.
Posted by Jongudmund at 21:31