When I declared for Barry Town last season, I didn't think they would qualify for the Europa League preliminary round. Of all the clubs in the draw, Cliftonville was the closest away trip we could get. (I had been a bit worried we would end up in Kosovo.)

The first leg was at 'home' but UEFA didn't pass Jenner Park as fit to host European football, so Barry had to decamp to Cardiff Athletics Stadium in Leckwith. Now as Leckwith is next door to Grangetown, this benefitted me personally, but I think it was to the detriment of the team.

Despite decking out Leckwith with Barry flair, it wasn't a 'home' game.


Even bringing along a huge number of mascots didn't work to dull the brightness of the blue interactive running track (seriously, it's called Power Track and times races by itself).


Still, Barry battled to a decent 0-0 draw against their Northern Irish opponents. 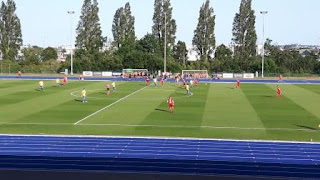 Which set things up nicely for the return leg. I got the early flight into Belfast, landing at 7.15am and with some newly-made friends arrived too early for breakfast at a  city centre Wetherspoons. Once it opened I had the veggie version of an Ulster Breakfast. I'm going to post a general post about everything else I did in Belfast, but suffice to say about 11 hours after our flight landed, I arrived at Solitude, the home ground of Cliftonville FC.

We all gently and politely squeezed into the clubhouse, which had already been claimed by the Barry fans. I discovered Clonmel Lager. I liked it.


Soon it was time to head to the away end in anticipation of kick off. 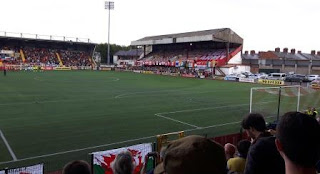 That big, derelict looking stand? Yes, it has actually been condemned. There's been discussion about how Solitude made it past the UEFA inspectors when Jenner Park failed. The pitch is an old style artificial pitch with so much black crumb getting kicked up the players looked like Pigpen from the Peanuts cartoon strips. I also noted that the directors parked their cars next to the derelict stand, inside the ground, at considerable risk of a drilled clearance denting their bodywork.

Previous visitors had left their mark on the away end. 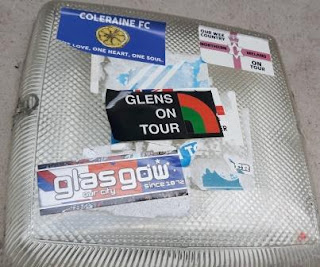 We flagged it up. I don't think anyone brought stickers.


Cliftonville led 2-0 at the break. I stood motionless in the chip van queue for 15 minutes then gave up as the second half kicked off. The sun came out. The rays really made the rust patterns on the derelict stand 'pop'.


We saw very little down our end in the second half. Cliftonville got two more goals. This then prompted a conga of Barry Town fans around the away end, and in front of the 'overflow' home fans who had been parked in seats next to us, singing "Four nil down; Who give a f***; We're Barry Town; And we've got a fox!"


So, yeah, about the fox (as seen at the front of the conga there)... Well, two Barry lads turned up with it. There are already a few versions of the story going round, but the one I heard is that "Basil" (as he's now known) was acquired as they walked through a housing estate to the ground, when a random old chap asked them if they wanted to buy a stuffed fox (it's a proper stuffed fox, as well, not a toy). Now, that in itself is weird, but I suppose the really weird thing is that they said yes, and brought him along to the game.

The fox has come home to Barry. It took the lads in question an hour with environmental health officers to get him on the plane. As hand luggage.

A 4-0 defeat, a plane ride away from home? Well, you got to keep singing. At the end the players trudged across the pitch to applaud the fans and stood there for five minutes listening to us sing.


The reaction on social media from the Cliftonville fans shows that we made an impression the way we kept on singing throughout the game. Realistically, football-wise it was a hammering. It was an epic away trip in every aspect apart from the 90 minutes on the pitch. I have no regrets about going and I would do it again... except that's the end of the Europa League dream for this season.

(A shout out to the Barry Town fans I made friends with on the trip and Mike, Steve, Neil, Mark, and Kathryn, in particular. Also to Tom and Steve H who sat through the 0-0 at Leckwith with me.)